“I never found the paint job acceptable. I thought it needed another coat of paint and better brush strokes.”

The first feature by writer-director Michael Taav is an unsettling thriller, that was shot in and around Kenosha, Wisconsin.

Will Patton plays a paranoid small-town house painter in the Midwest. Bebe Neuwirth is the flaky but vulnerable wife of his boss Robert Pastorelli, whom he falls for. What Will is unaware of, is that his boss is a serial killer who has a thing about killing drunken derelicts because they bring back bad memories of his abusive father. Both males in the love triangle have come out of troubled childhoods. Poor Bebe is uncertain which of the needy men is a keeper.

The best thing about this dangerous obsessions psychological flick, whose attempts at comedy bomb, is the lively musical score by British folk-rocker John Wesley Harding.

I never found the paint job acceptable. I thought it needed another coat of paint and better brush strokes. 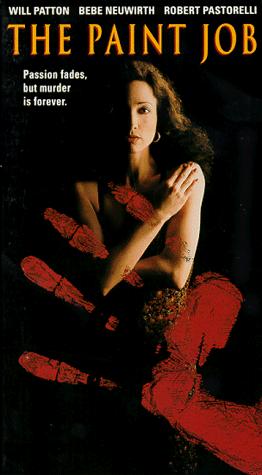