John Curran (“Praise”/”We Don’t Live Here Anymore”) directs the third and best screen rendition of W Somerset Maugham’s prissy 1925 novel. The tepid 1934 one featured Garbo, while the 1957 remake was titled The Seventh Sin and was a complete dud. This lush Technicolor version of the soap opera story contents itself with making the Maugham work less prissy, exacting detailed period construction and inducing a soporific Chinese flavor of the times that featured revolutionary unrest.

It’s 1925, and the serious but socially awkward British civil servant bacteriologist Dr. Walter Fane (Edward Norton), stationed in Shanghai, proposes marriage in London to the pretty but vain, selfish and spoiled Kitty (Naomi Watts), the beautiful daughter of a wealthy and socially prominent family, after just meeting her. The Doc must get back to his beloved China, and the bored 25-year-old Kitty is anxious to get away from her nagging parents. After marriage Kitty has an affair with the caddish married smoothy diplomat Charlie Townsend (Liev Schreiber), the vice-consul, stationed in Shanghai. Hubby gets wind of the affair and threatens a scandalous divorce unless she accompanies him to a remote Chinese village where there’s a cholera epidemic and he volunteered his services. The vengeful doctor, in a fit of jealousy, would agree to a quiet divorce only if Charlie agrees to divorce his Dorothy and marry her. Naturally, Charlie can’t do that and he instead plunges full-steam ahead handling a Chinese nationalist uprising. The superficial Kitty forced to accompany hubby, will in this unlikely cholera battlefield undergo a spiritual awakening and recover a sense of morality. In fact, both of them discover something better about themselves that wasn’t previously revealed and bring some passion to their marriage.

The film fights through the dullness and the lack of likability of all the main characters by trying to liven things up with an outbreak of modern-day emotions attached to the 1920s period look. Your heart might also be warmed by the superb nuanced performances of the stars, the stunningly beautiful photography by Stuart Dryburgh and the taut script by Ron Nyswaner. These assets keep it watchable but never cures it from its terminal tediousness. Let’s hope that there are no more versions of this insipid Maugham novel.

Diana Rigg pops up of all things as the Mother Superior and Toby Jones pops up as a lovable deputy commissioner gone native to become an opium addict, the last white man in the cholera infected area. 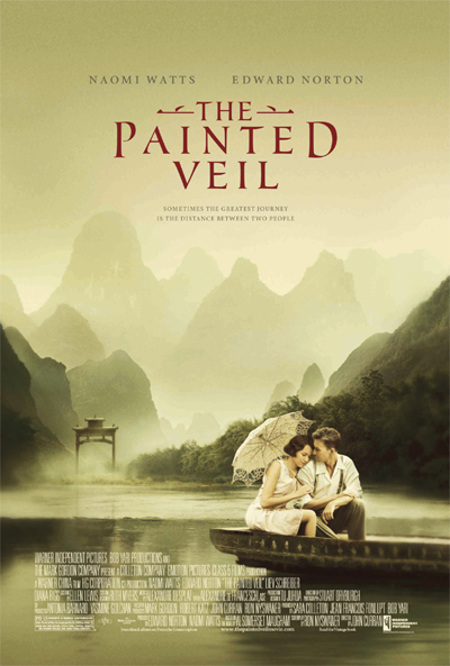