A psychological thriller about a sociopath who buries a missing woman alive in an undisclosed location and gives the police 24 hours to find her. The killer’s motive at first seems to be ransom, but as the story develops it turns out that he wants to see her suffer. He also wants to be held in police custody and to escape from the police station while manacled, thereby he hopes to be recognized like his hero Harry Houdini was as the greatest escape artist of all time.

Harry (Adrien Brody) kidnaps Frances Hannon (Laila) and her pooch in front of her Manhattan building and takes the hysterical woman to a wooded area around the NYC area (Poughkeepsie cemetery), where he videotapes her and buries her alive in her underclothes. He then has his partner deliver the ransom demand of a million dollars and the videotape of her screaming for help to her wealthy art dealer husband (James Naughton). The location of the ransom drop is at the Queens cemetery where Houdini was buried in 1926.

Assigned to the case are a team of NYPD detectives, which includes a husband and wife team, police captain Tim (Terry Kinney) and detective Madeline (Maura Tierney), and an ace detective Jessie (Paul Calderon). The married couple are going through a rough period in their marriage where Madeline is not faithful to him and is lost in her own troubled world, realizing that she has a very dark side to her that she can’t stop from surfacing.

Stylishly written and directed by Richard Shepard (The Linguini Incident), “Oxygen” is a compelling psychodrama whose story is sickening but is superbly played by an excellent cast. Adrien Brody got the most he could get out of the character and gives a riveting performance of someone who has gone over the edge. Maura Tierney also turns in a spectacular performance, portraying a very troubled but courageous woman. It was easier to find out what was troubling Harry than it was to get to the bottom of her problem.

When the victim’s husband goes to the cops even though he is not supposed to, the cops nab Harry after the ransom drop-off at the cemetery and a high-speed car chase into Manhattan. It then becomes a cat-and-mouse game between Harry and the police, with him refusing to talk to anyone but Madeline. He spots cigarette burns on Madeline’s arm and senses they have the same perversions and need for pain. The victim’s impatient husband pulls strings and gets the F.B.I. involved in the case, muttering under his breath that these cops are amateurs.

There are many problems with the story’s credibility, starting from all the power the woman detective is given in handling the case and the fact that NYC has a department code that states a married couple can’t have one of them be the supervisor of the other. There are many other contrivances in the story that I’m afraid don’t add up, as the police would never allow Madeline to be left alone in a room with Harry and without a two-way mirror or microphones. No police procedure would ever take that chance, and the film hinges all its marbles on that being accepted for its tricky ending to work. But for sheer excitement, the fast-paced film moves rapidly along to see if the police can get to the buried Frances in time.

Brody gives the performance of his career, so far. “Oxygen” had some fresh air in its tank, but it also had too many derivative scenes that smother it; especially, the opening subway scene where the police couple come across a wanted felon and give chase. For a brief time, I thought I was again watching “The French Connection.” 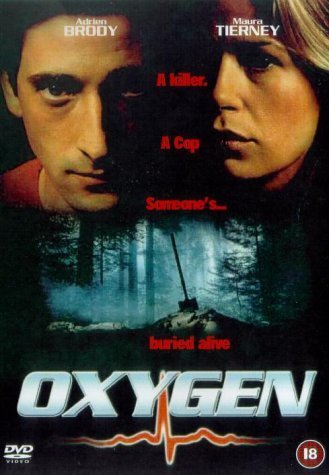