“Is worth seeing because it sometimes feels good just watching a dead person come back to life.”

A claustrophobic French survival thriller helmed by the schlocky horror maven filmmaker Alexander Aja(“Crawl”/”Mirrors”). This marks Aja’s return to French-language cinema after about a twenty year absence. The puzzling film follows along the lines of the film Buried (2010) and other locked-in-a-box dramas such as Alien, Locke and Gravity. It’s written with a droll humor by Christie LeBlanc.

The amnesiac Elisabeth (Mélanie Laurent), a doctor of cryogenics (the science of re-animating life forms), wakes up in a cryogenic pod with a countdown on her life, as the oxygen is running out. To keep her company there’s a computer-created A.I. named M.I.L.O. – Medical Interface Liaison Operator (Mathieu Amalric) – in the pod with her, who offers mild comforting retorts as the vic struggles to figure out who she is and how she got there, and, of course, how to get out of there alive. The heroine is known only as “Omnicron 216”.

The entire film is set within the cramped, cockpit-like chamber, about the size of a coffin, that has room only for the one visible character.

Oxygen is a creepy and tense film, and gets a good emotive performance by Laurent. It comes with a tantalizing synth score by French musician Robin Coudert, credited under his stage name, Rob, and good atmospheric photography by Maxime Alexandre the DP. Léo Ferguson plays her husband, while Eric Herson-Macarel plays a technology unit police division captain.

The film is absurd and requires a suspension of disbelief, but is worth seeing because it sometimes feels good just watching a dead person come back to life.

M.I.L.O.’s  calm refrain to the heroine, “Would you like a sedative?”, captures the film’s intended droll humor. 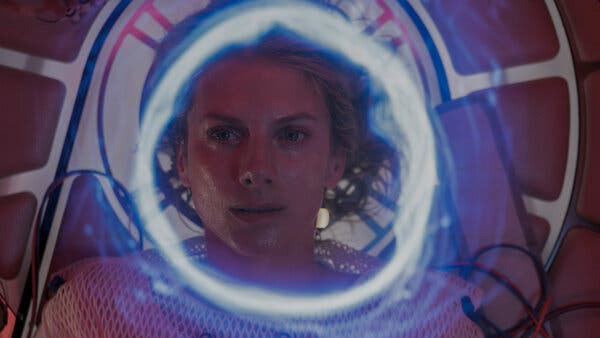 VERY EYE OF NIGHT, THE