OPERA JAWA (aka: REQUIEM FOR JAVA)

It was commissioned for the New Crowned Hope project by musical impresario Peter Sellars and sponsored by the city of Vienna to mark the 250th birthday anniversary of Mozart, and was meant to be an Eastern version of Mozart’s Requiem (though mostly playful until the tragic climax) for the world’s victims of violence, religious extremism and corrupt politicians. This unique revolutionary opera from Indonesia is a sumptuous surreal musicalthat’s modernized and loosely based on “The Abduction of Sita,” from the Hindu Sanskritepic “The Ramayana.” Writer-director Garin Nugroho(“The Poet”) keeps it both magical and grounded in reality, no easy task.The colorful settings and costumes; lively mime, song and dance numbers (especially noteworthy are the scintillating gamelan music, a huge fat man with big tits singing Javanese folk tunes and sacred court dances); and an invitingly erotic and meaningful love triangle tragic tale, make Opera Jawa a refreshing treat.

In the rural village of Umbal Makmur, serene village potters Setio (Martinus Miroto) and Siti (Artika Sari Devi), who were former ritual dance partners, are now happily married until Setio takes his ox cart to go on a long business trip to sell his wares. The local lustful wealthy butcher, Ludiro (Eko Supriyanto), who runs the town and is adorned with a Devil-like goatee, sees this as an opportunity to tempt the lonely Siti to be with him, as he plies her with gifts so that the former Ramayana dancer can once again dance even though her jealous husband forbids her to dance for the pleasure of others again. Siti used to play the part of Sita, the beautiful wife of Prince Rama–the role that Setio used to play. In that puppet dance play, the sensual Sita became the sexual object of the evil King Ravana and was abducted by him to the land of Lanka.

The ancient legendary play is now transferred to the small village, as it plays out in a similar way to the Sanskrit epic. Because Siti couldn’t resist dancing for the butcher (the lady wants to be free of bossy men, like her hubby, telling her what she must do), Setio is overcome with unwarranted jealousy and refuses to sleep with his wife when he returns from his business trip. This drives the confused Siti into the arms of the cunning Ludiro, who takes advantage of the vulnerable beauty as he thinks only of himself. This sets the stage for the rival men to have an epic battle. In the backdrop, the village goes through a crime-spree from the lawless elements and a peasant uprising, and there’s an ensuing war on the horizon as well as the threat of economic ruin. The poor state of the country is blamed on arrogant politicians and on a government that is run so poorly.

It’s a bold attempt at Indonesian traditional storytelling, that puts into the blender Western modern dance, silly kitsch moments, moments of harsh reality and European high art. A spectacle film that’s hard to stop looking at and even harder to categorize. It’s not for all tastes and is too cluttered with details, making it difficult to follow at times; but, for those who come to the visual feast in the right PC frame of mind it’s a special unforgettable treat that by any standards is a superior work. 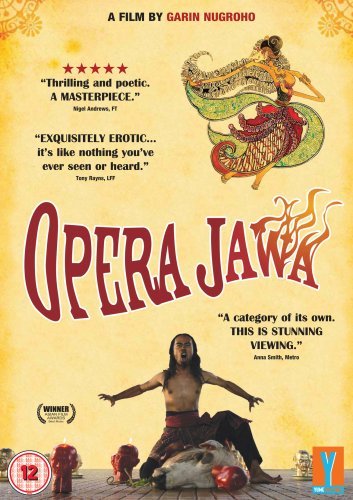