In this straightforward political documentary the 58-year-old leftist and longtime director and producer Robert Greenwald (”Uncovered: The Whole Truth About the Iraq War”) takes aim at Fox News for its slanted right-wing coverage of the news and for influencing other news stations to follow suit. Greenwald shoots on the cheap in the ”guerrilla” method of documentary filmmaking. This necessary work records in-depth how unreliable the news is on Fox. It does so through a series of interviews with talking heads (including Vermont Congressman Bernie Sanders, Eric Alterman and Jeff Chester), with media experts (including Walter Cronkite, Jeff Cohen, Bob McChesney and Chellie Pingree), with former FNC employees (some have even chosen to remain anonymous in order to protect their current livelihoods), and it also includes extensive footage of Fox News programs in action (talk show host Bill O’Reilly is given a lot of attention and his blatant lies provided most of the film’s comic moments). The point that’s adequately made is how the Fox News distorts the news to make it similar to its opinionated talk shows. Greenwald never asked Fox for permission to use its footage, suspecting that it would be denied. Therefore the documentary was done in secret, and released on DVD prior to its theater showing. I viewed it at my hometown church with a group of other people, who seemed in full support of the film’s aims to show how Fox manipulates the news to a largely unsuspecting public.

A good-sized chunk of Outfoxed’s $300,000 budget was provided by MoveOn and the Center for American Progress. Volunteers from MoveOn also helped Greenwald monitor the cable news channel 24-hours-a-day for months. The result is an eye-opening study of Fox News and the lie manifested in its motto: ‘Fair and Balanced.’ Greenwald’s slogan he has posted on his Web site is “We watch Fox so you don’t have to.” That’s a good thing, because Fox News is only useful in my humble opinion if you want to know what the enemy is thinking. To watch Fox News as your main source of news would most likely indicate that you swallowed the garbage they feed you about “liberals,” fallen into the climate of fear campaign they created so that it would produce unthinking trust in the current powers and convinced you how great a leader is President Bush 11 by offering softball coverage of his daily activities.

The documentary tells how the station’s Australian billionaire owner and media magnate Rupert Murdoch forces his political views on the broadcast. If you don’t march to Murdoch’s drum, you have no future working at the station. The most damaging evidence presented of how the Murdoch empire conspires to spin the news its own way, was by showing a bunch of leaked daily memos from Fox executive John Moody, a senior vice president, sent to the entire Fox News operation directing how the news should be presented.

Maybe along with other noteworthy hard-hitting political documentaries coming out this summer/fall, such as Michael Moore’s Fahrenheit 9/11, the public will get a chance to see how not only Fox but the entire establishment media let them down in regards to the facts about the Iraq War. The documentary soberly warns of the dangers of media consolidation and of how without a free press our freedoms are threatened. Throughout it points to many examples of the way Fox News hammers home its conservative ideology and how it has become an adjunct of the Republican Party following their political line whenever possible.

I have no problem with the political film not even pretending to be balanced, in fact I preferred it that way as being more honest, but I wondered why it never explored why Fox News caught on with the public while other supposedly more reliable stations lost out in popularity. What I’m getting at is that the public’s perception of the media is that it leans to the left, yet I think if the media became de-consolidated as suggested by the filmmaker it would only mean an increase in right-wing stations (I point this out while agreeing that the impact on society is not a healthy one when a great portion of the media is controlled by one person). The film might have been more interesting if it didn’t spoon-feed the obvious to its like-minded audience and tried instead to discover something it didn’t already know–like why the left is losing its once steadfast blue-collar worker base to the Republicans, who certainly don’t serve their economic needs. Nevertheless, with that being said, the power of the film lies in its intense presentation of how Fox News operates to satisfy its political aims by altering the news to fit those aims. In one segment, after the memo goes out to get Kerry because he looks French, the film documents how that lie is repeated by every news show until it sinks in as a given truth. I dare say that Joseph Goebbels, the Nazi official propaganda director, would be proud of how accomplished the station, which started in 1996, has become in the use of propaganda and spreading lies. 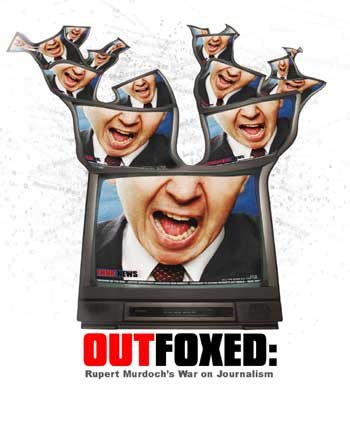