OUR LADY OF THE ASSASSINS (Virgen de los sicarios, La)

In this disappointing Barbet Schroeder movie the protagonist is the 50ish gay Colombian writer Fernando Vallejo (German Jaramillo– stage actor and founder of the Free Theater in Bogotá), the writer whose autobiographical story this film is based on. At least, it seems like it’s autobiographical. In any case, I’m told the film follows the book very closely. Schroeder was raised in Colombia and his return there parallels the writer’s story in many ways; things have changed so much that during filming he needed armed guards to escort him around town, as he was threatened by the drug lords.

Fernando’s an ardent grammarian and an old fart and a non-stop complaining grouch and a lapsed Catholic, who is nevertheless still drawn to the mystical icons in the church. He becomes an increasingly annoying and smug and empty character in this overwrought politically motivated film. It’s stiffly acted (the cast were all nonprofessionals except for Jaramillo) and unimaginatively photographed guerrilla-style by cinematographer Rodrigo Lalinde and lazily directed with too many contrived scenes used only to hammer home his points (the one about the assassin not being able to kill a hurt dog in pain is one such example), and with a dull screenplay to boot that hardly rises above being a lecture point about good manners and a moralizing about evil in the world. It’s a Colombian tourist bureau’s nightmare, as all Colombians are equated with crack heads and pigs and thugs and ignoramuses. Colombia has become the notorious cocaine capital of the world ever since the infamous drug kingpin Pablo Escobar was executed a few years back. The vestiges of the kingpin’s days are seen in the hordes of teenage hired mercenaries fighting for gang turf to sell their drugs. This film doesn’t let the viewer forget just what ill that drug cartel has done to the country and the negative effect it still has. By the time it makes its obvious point that all the butchery taking place leads nowhere, after a stack of dead bodies pile up, I felt tempted to throw the video out the window just like Fernando did to his ghetto blaster and TV when he was disturbed by the loud noises coming from them. The filmmaker didn’t even pretend to show that the writer was in the least bit interested in writing instead of hanging on to his toy boy assassin lover, no matter what. If he had writer’s block, nothing about it is mentioned. The film even managed to make the sex scenes lack appeal, as there was no sexual chemistry between the lovers. Another misplaced twist is that the writer constantly expresses an urgent need for the pleasure there is in golden silence — which he says is a blessing from God — but he immediately rushes out with his young lover to the noisy streets whenever there is a dull moment of that silence.

After living most of his life abroad, Fernando comes home after thirty years to Medellin “to die” and collect his inheritance from his recently deceased wealthy sister, which was acquired after the death of her Mafioso husband. His inheritance includes a luxurious but nearly bare hi-rise apartment. At a gay house party he’s introduced by a wealthy friend to Alexis (Anderson Ballesteros-he was 16 and wanted for kidnapping and armed assault at the time of filming), a boy who is sentenced to die by a rival gang and who packs a heater and relishes listening to loud metal music and wearing the whole nine-yards of designer apparel from T-shirts to a baseball cap. Fernando eagerly becomes the sugar daddy to Alexis, and revisits the sights of his changed-for-the-worst hometown. He unsuccessfully tries to raise the boy’s level in music by playing a Maria Callas CD for him and vainly tries to discourage the boy’s inclination to answer every problem with his gun by telling him there’s a difference between thought and action. They visit different churches together and attend Mass, and he is peeved to see how at night the churches have now become hangouts for drug dealers. While checking out different neighborhoods and visiting the happy house he lived in as a child, he becomes upset to see how this once picturesque city has changed for the worst most noticeably because of its noisy and crowded streets and how rude the people now act. It becomes apparent to him that the city is so corrupt, that legitimate businesses can’t exist. The boy tells him the town is now called Medallo, which only makes Fernando grimace some more thinking how different the young and old see the city. There are carjackings, regular drive-by shootings, and fireworks go off when a shipment of cocaine safely reaches the U.S. A.. The dangerous and uncivilized country has gone to hell and to make matters more ludicrous, the locals are so stingy they don’t even give you a whole napkin in a restaurant. Soon a hippie punk drumming under the window of the two lovebirds is casually gunned down by Alexis in the street. Next follows a cabbie who wouldn’t shut off the loud music during the ride. Alexis doesn’t think twice about these killings, as he just believes he’s disposing of human trash. The pace of the killings then picks up, as does the lustful love each shows for the other. But after a few failed attempts on Alexis’ life by the rival gang on motor bikes, he’s assassinated. After months of mourning his loss, coincidentally, Fernando picks up another hustler on the street, Wilmar (Juan David Restrepo-a street kid living in poverty in the dangerous hill neighborhood), who happens to be the one who assassinated Alexis. Fernando doesn’t know this until one of Alexis’ friends asks him — Why are you going out with the one who killed Alexis? Wilmar is a clone of Alexis, and lives the same violent lifestyle and appears in the same type of youth oriented designer outfits and comes from the same impoverished background. The blunt point made is that the youth no longer have a chance to survive in this violent atmosphere, that the ones who caused the poverty such as the drug cartels and the lying leaders in the government have to be eliminated. Unfortunately Barbet Schroeder doesn’t tell us how to eliminate them or what he means by that; but after judging how superficial his responses are to everything else, I guess it’s better he just left it at that.

This was one ugly and grim flick. Its broad aim was not to tell the story of Fernando Vallejo’s death wish, but to point out to the world how the Colombian government is corrupt, the church useless, that God doesn’t exist, and that the powerful drug cartels have crippled the country and taken away its spirit. The message is fine, the film itself is not so fine. All this grouching by Fernando might have been witty as long monologues in the book, but here it’s awkwardly affected. Every time you want to believe that Fernando is a good guy, a world-weary traveler seeking peace and quiet, a concerned citizen about the country’s overwhelming poverty and its dishonest politicians, the filmmaker puts a roadblock in front of that and leaves us puzzling at what a phony this high-sounding sophisticate might really be. 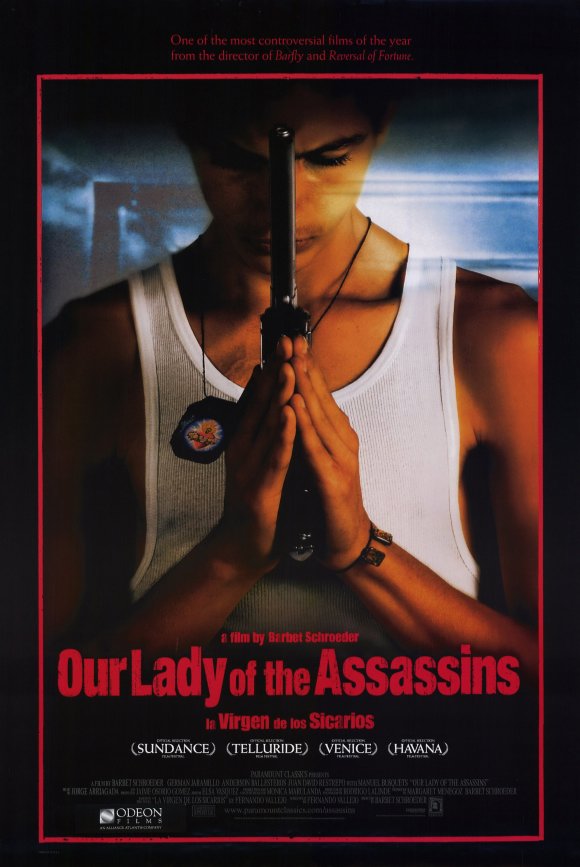