“It’s the kind of inane pic that makes you wonder why Oshima was drawn to it.”

The great Japanese filmmaker Nagisa Oshima (“Violence at Noon”/”In the Realm of the Senses”/”Shonen”), in one of his lesser films, shoots in Paris an uneven bizarre love triangle comedy that follows in the surreal style of Buñuel. It has a field day uncovering the hypocrisy of the bourgeois and mocking them. The title is derived from the chimp named Max. It’s scripted by Jean-Claude Carrière, whose idea the film is based on.

Charlotte Rampart is the bored wife of the bland English diplomat Anthony Higgins, stationed in Paris. Higgins is the stereotyped Brit upper-crust with a stiff upper lip, who suspects his wife of having an affair. The private detective he hires to follow her in the afternoon discovers his wife makes daily visits to an apartment. When he investigates, he catches his client’s wife in bed with a chimpanzee named Max. Peter is told Max is a refugee from the circus, and for her it was love at first sight. With that, Max is invited to be part of their family as a pet. The cunning diplomat wants to avoid a scandal. Most of the comedy is delivered at a home dinner party, as the guests look on in bewilderment as Max and Charlotte smooch.

Peter is viewed as a hypocrite, since he’s carrying on his own affair.

Rick Baker designed the ape suit worn by the guy playing the chimp. The film plays out as a fable, but failed to convince me anything either serious or funny was unearthed. It’s the kind of inane pic that makes you wonder why Oshima was drawn to it. In any case, he proves too staid to direct such an outrageous romp. To make matters worse, the performers were too uncertain in their performances and failed to give such social satire the jolt it deserved. 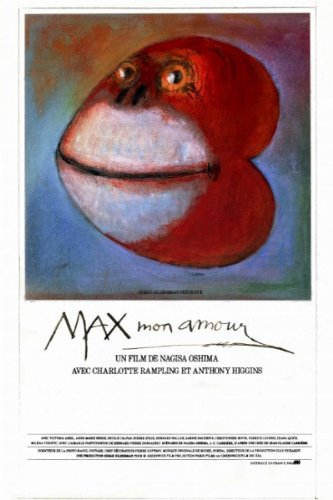