The 38-year-old Portuguese filmmaker and former film critic Miguel Gomes (“Tabu”/”The Face You Deserve”) helms this perplexing but at times captivating freewheeling docudrama, neither a documentary nor a narrative film, that blends fact and fiction into the filmmaker’s unique art form. Though not for all tastes, its provocative attempt to give cinema a new lift deserves our appreciation for the effort alone. In the real story behind-the-scenes, the director has told the media he ran out of funding while filming in the remote mountainous Portuguesevillage of Arganil and decided to shoot his film crew just messing around until he was able to put together a story that shines its light on amateur musicians (all nonprofessional actors). Eventually he did get funding to finish the self-indulgent movie. It playfully records a few pop concerts in Arganil, as well as the locals hunting wild boar, setting off fireworks and drunkenly singing karaoke. Gomes films colorful religious pageants, and goes on to tell a weird soap opera relationship tale about a cheesy touring pop band featuring a pretty teenager singer named Tania (Sónia Bandeira), her controlling father Domingos (Joaquim Carvalho) and the pretty-boy guitar strumming singer cousin from Lisbon Hélder (Fábio Oliveira). They sing teenage cornball Euro love songs for those not up to speed with more classic rock.

The rambling film is pretty to look at, with great mountain shots and diverting rustic looks at the scenery, and the camera falls in love with the eccentric hicks going about their usual routines in amusing ways. The film observes the crew and how a sportingly attired Gomes, in an old-fashioned white golfer’s hat, at the film’s end confronts his audio man for allowing “phantom sounds” into the pic and his excuse is that he’s bored when not recording the music. The locals recruited into the film are viewed in a Candid Camera like format trying to make sense of what the film is about and what’s expected of them. The fiction story centers around the summer romance between Helder and Tania, and her jealous father whose wife, a lookalike for his daughter, abandoned him. It also awkwardly brings up the possibility of incest, but like everything else about the pic it never feels the need to clear things up and rests on blurring the lines between reality and fiction. Gomes is a more playful than fellow countryman realist filmmaker Pedro Costa, who uses the same minimalist techniques. 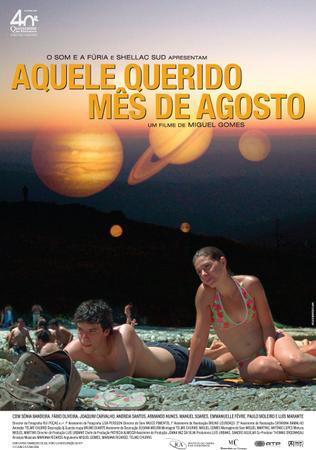