“Whose images of everyday life in the sticks makes for hypnotic viewing.”

The 42-year-old university film teacher, Michelangelo Frammartino(“The Gift”), writes and directs a visually beautiful unique second film with virtually no dialogue, just the natural sounds of nature, whose images of everyday life in the sticks makes for hypnotic viewing. It’s a meditative film grounded in nature, that’s set in a medieval hilltop community in rural Calabria. Inspired by Pythagoras’ belief in “four-fold transmigration” of souls, Frammartino’s serene film unfolds by showing how everything is connected in the sublime universe. There are plenty of images indicating regeneration and renewal, as the pic follows through the four seasons of a religious dying elderly goat herder, his clever collie, his goats, a magnificently large fir tree, the Passion play festival in the community and a heap of smoking charcoals in a kiln.

The film can be viewed as a study of everyday Calabrian life or in its deeper meaning as a spiritual investigation on the mysteries of life. It’s one of those delightfully playful films that one just soaks in and lets one’s mind wander over the territory covered, as it’s an original film that warrants repeated viewings to fully enjoy its droll humor, its rich pathos and its intent to get us to picture our own version of mankind’s place in the universe. It couldn’t be more austere or inviting, as it requires no great knowledge of religion, philosophy or film to get into it. It just quite simply allows the viewer to make of it what he wants by providing plenty of food for thought and hoping he will have an open mind about the experience. 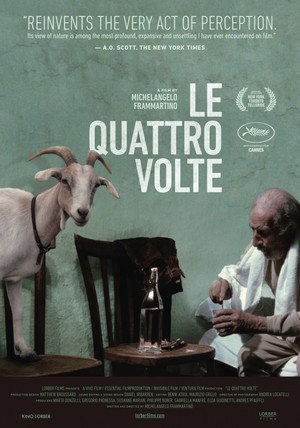