It opens with the Duke and his Navy men rescuing on an unnamed Pacific island held by the Japanese some nuns and a group of orphans, who walked 40 miles through the jungle to safety. The Duke returns to Pearl Harbor and on a visit to Honolulu discovers his ex-wife Mary is a Navy nurse and is dating handsome Lt. Bob Perry (Philip Carey), the younger brother of Cmdr. John T. ‘Pop’ Perry (Ward Bond), who’s his boss and best friend. In a submarine battle tragedy, Pop loses his life. Duke takes command of the Thunderfish and is told by the admiral that the rescued submarine is grounded until the cause of why its torpedoes misfire is discovered. At first Duke exclaims in frustration “I’m no theory man. I’m a line officer,” but soon the dedicated Navy man finds the cause and takes on the Japanese battleships in the climactic scene. After that victory at sea it now becomes a matter of whether Mary will choose him again or accept Bob’s proposal. Only a sucker would bet against the Duke, and my mom didn’t raise me to be a sucker.

Vice Admiral Charles Lockwood, WW II submarine commander, acts as technical adviser for this black-and-white film. Though it has nothing much to get excited about, it’s at least watchable. The most interesting fact is given in the opening credits: 52 American submarines were destroyed and 3,500 men on them died during the War. 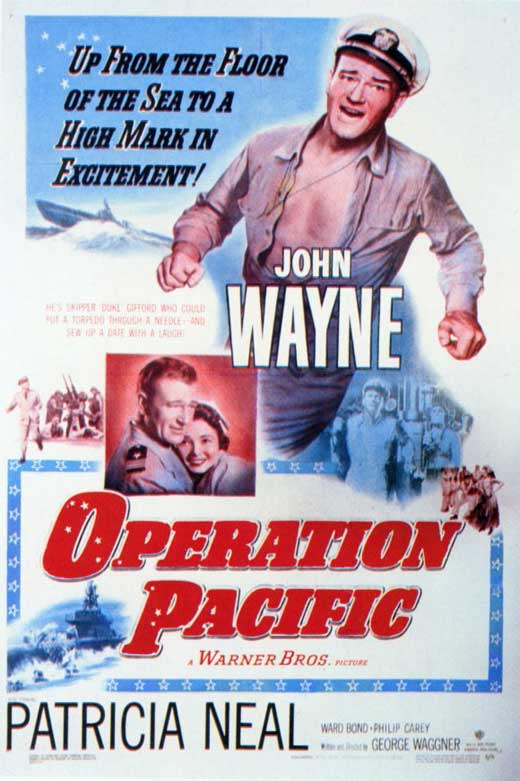