“Has a time travel theme. This was the first of many such films.”

The Scottish-born Frank Lloyd(“Cavalcade“/”The Howards of Virginia”/”If I Were King”) stylishly directs this fantasy romance pic–which has a time travel theme. This was the first of many such films. It was adapted from John Balderston’s hit play. He in turn based it on Henry James’ unfinished novel “The Sense of the Past.” It was remade as I’ll Never Forget You (1951), which used the same script. Leslie Howard reprises his same stage role, in this unusual love story.

Peter Standish (Leslie Howard) is a wealthy American modern-day architect, who resides in New York but in 1933 inherits his 18th century cousin’ London house at Berkeley Square. Peter craves to live in the 18th century after reading the diaries of his American-born namesake that he found in the London house. Through some inexplicable magic, modern Peter goes back to 1784 and assumes the identity of his cousin. Back in the past, Peter falls in love with his impoverished upper-crust distant cousin Helen Pettigrew (Heather Angel), but foolishly proposes to her older sister Kate (Valerie Taylor) upon the urgings of her mom, Lady Ann (Irene Browne) and brother Tom (Colin Keith-Johnston), and then marries her. They think the wealthy cousin would pay off the family debts if they get him to marry Kate. The transported Peter through his relative’s connections gets to meet such renown figures as Sir Joshua Reynolds (Olaf Hytten). But he also frightens his relations the way he can be so sure of seeing the future.

Though I won’t dispute this quaint fantasy period pic was well-executed, well-acted and preciously imaginative, I just couldn’t completely go along with its flights of fancy. I found it to be a polished exercise in theater, that held 18th century London up to a higher standard of culture, refinement and manners than modernity until that is disproved. To debunk nostalgia seemed to be its cynical intent and it, indeed, accomplished that goal. 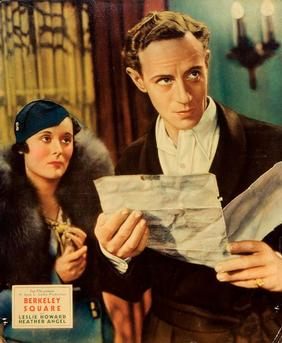 MY STEPMOTHER IS AN ALIEN