This film is so bad even the title that states we are dealing with untamed youths is misleading. All the youths in this prison pic are so tame that all they care to do after a day of hard work picking cotton and being abused by wino prison guards is dance at night to rock ‘n’ roll in front of a juke box. Veteran B film director and longtime TV producer Howard W. Koch (“Badge 373″/”Shield for Murder”/”The Girl in Black Stockings“) hits rock bottom with this campy exploitation rock ‘n’ roll juvenile delinquency movie, that turns out to be more than anything else about nasty adults acting corrupt while hiding behind the law.The teen flick blatantly doesn’t have a teenager in it, as all the actors in juvenile parts look to be in their twenties or older.

The film’s best line has one of the inmates saying: “You’d still be a moron if you had two heads.”

In the rural south, corrupt Sheriff Mitch Bowers (Robert Foulk) arrests the aspiring musical performer sisters, the younger but more together Jane Lowe (Lori Nelson) and the more sexy but vulnerable Penny Lowe (Mamie V. Doren), who are hitchhiking to Hollywood to make their mark in showbiz.Because of the hitchhiking, skinny-dipping and vagrancy infractions, the girls are sentenced by Judge Cecelia Steele (Lurene Tuttle) to do hard labor for a month at a private farm run by slimeball tyrant Russ Tropp (John Russell) and are grossly underpaid for working like slaves. The ugly older judge and the hunky younger Tropp were secretly married four months ago, and are running a get rich quick scam operation that was made legal only when they bribed local officials.When the judge’s straight-arrow son Bob Steele (Don Burnett) is discharged from the Navy, he works the giant tractor on the farm, his mom once owned when his dad was alive, and while snooping around discovers Tropp is feeding the prisoners dog food, preying on the female prisoners with unwanted sexual advances, using his two fierce Dobermans to attack those he doesn’t like or wants disciplined, and has disobeyed a court order to give the prisoners mandatory medical check-ups–this neglect results in the death by miscarriage of one undetected pregnant teenage cotton-picker (Yvonne Fedderson) who was forced to work in the field because her delicate condition was not known.

The gallant Bob falls in love with the tough-minded Jane, and after learning of his love-sick mom’s pathetic marriage vows to straighten things out in the funny farm and to tip off his blinded by love unethical mom that she married a real creep. How he does it, is about as much fun as picking cotton in a sweltering cotton field.

The acting is strident, the directing is yucky, the script by John C. Higgins, which is based on the story by Stephen Longstreet, isn’t worth a damn and, to boot, it has one of the worse catfights in movie history–where one woman combatant threatens to give the other an ‘Italian haircut.’ If you know what that means, this film might have targeted you as its ideal viewer. 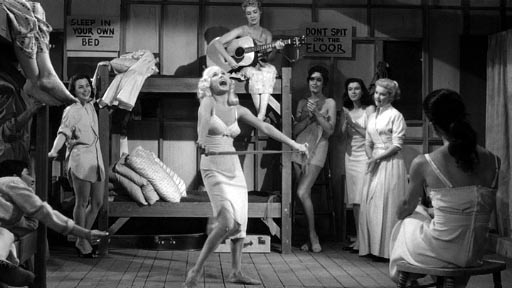