“Packs a powerful lesson on racism.“

A 1964 melodrama that deals with the still controversial topic of miscegenation, showing its effects on society and personally on the interracial couple. No Hollywood studio would touch the daring topic at the time until three years later with Stanley Kramer’s Guess Who’s Coming to Dinner, so it was produced by an indie company. The low-budget b/w film is directed in a subdued way by Larry Peerce (“The Bell Jar”/”Ash Wednesday”/”Goodbye, Columbus”), in his debut, and is intelligently written by Raphael Hayes and Orville H. Hampton. It was filmed in northeasternOhio, in a town called Painesville.

When her husband leaves her, a white mid-western woman remarries a black man. But when her ex-husband returns, he fights her for custody of theirWhen Cleveland native Julie Cullen’ (Barbara Barrie) husband Joe (Richard Mulligan) leaves her, she divorces and moves with her 5-year-old daughter (Marti Mericka) to the small-town of Howardand takes a job in the local factory. There the timid white woman meets a mild-mannered refined black worker in personnel, Frank Richards (Bernie Hamilton), and after a cautious romance they marry despite not receiving the blessings of his farmer parents (his father is played by Robert Earl Jones, the real-life father of James Earl Jones, while mom is played by Vinnette Carroll) and her friends. The couple live on the isolated farm of Frank’s parents, where she gives birth to their own child. In due time, Frank’s parents become more accepting of the relationship.

When Julie’s unstable and self-centered ex-husband returns from his adventures in South America, he can’t accept his child with a black stepfather and fights Julie for custody of the child. The judge’s verdict of who gains custody was an eyeopener for seeing how racism was part of the fabric of America back then, as the decision was made taking into account society’s prejudices and ignoring what was best for the well -being of the contented child.

Though not offering great drama, nevertheless the film packs a powerful lesson on racism and its social conscience tale on interracial marriage in America’s Heartland doesn’t shy away from showing disturbing racism scenes as it moves into uncomfortable territory that few Hollywood films at the time ventured to. The unsentimental realistic pic shows ordinary people trying to live ordinary lives while confronting an American society in transition from its past social prejudices.

The title is derived from a jingle when playing in the schoolyard the child game of One Potato, Two Potato. 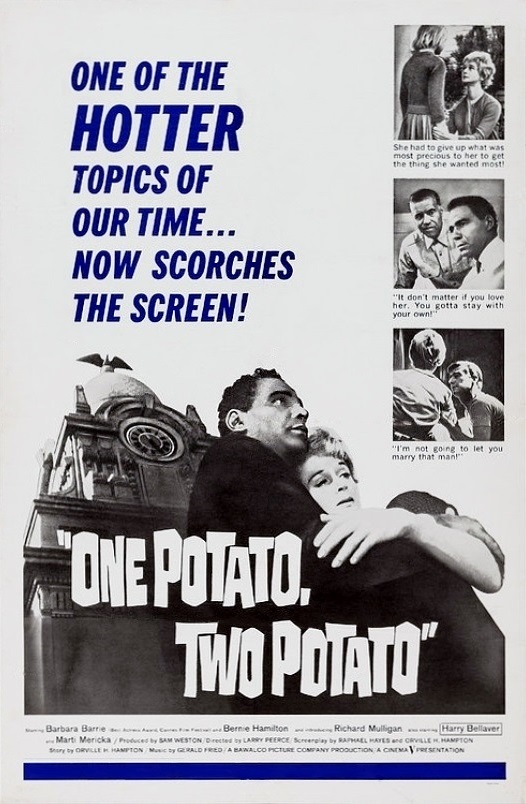