ME AND YOU AND EVERYONE WE KNOW

A quirky indie sitcom about a group of lonely people who can’t make a connection and live in a dreary low- middle-class Los Angeles neighborhood. It’s written, directed and stars performance artist Miranda July, in her feature film debut. The picture won prizes in 2005 at the Cannes Film Festival and Sundance Film Festival. The uneven romantic drama veers from raunchy comedy situations to making keen observations about desperate folks, and ends in a feel-good awkward confirmation that love conquers all. It’s a work enlisting a series of calculated risqué situations that will either charm or put you off.

Christine (Miranda July) is a timid, daffy, struggling video artist trying to get the local Center for Contemporary Art and its standoffish director interested in her work through a video she delivers in person but is told by the director it has to be mailed. The artist supports herself by driving a cab for the elderly. When Christine takes an elderly fare to get shoes she falls madly in love with the shoe salesman Richard (John Hawkes), who seems as lonely as she is but doesn’t quite know how to deal with her obsession with him. The white Richard has become unglued due to a recent separation from his black wife Pam, which seems to be an amicable separation. But for some bizarre reason, he set fire to his hand after soaking it with lighter fluid, on the front lawn, with his children watching. It was as if he were performing some kind of uncalled for divorce ritual to the gods.

Pam and Richard alternate taking care of the two boys–who when left home alone are glued to the Internet–the aloof and dour 14-year-old Peter (Miles Thompson) and the cutesy 6-year-old Robby (Brandon Ratcliff). Brazen teenage neighbors Rebecca (Najarra Townsend) and Heather (Natasha Slayton) first get the attention of Richard’s coworker Andrew (Brad Henke) and flirt with him in front of the window of his ground-floor apartment as he communicates dirty talk he can’t say in person by posting signs in the window. Unsure which of them gives better head, the girls use their classmate Peter as a guinea pig in their fellatio experiment to judge who’s the better. This is done in the hopes the info will come in handy when they meet the right guy and really fall in love. Peter’s real affections are for his younger obsessive-compulsive neighbor Sylvie (Carlie Westerman), who is collecting linens and other such wares in her hope chest. Meanwhile Robbie gets involved in an Internet exchange with a woman who is surprisingly receptive to his coprophiliac fantasies and agrees to meet him in a public park.

The film’s strength lies in the poignant way it paints the lonely and how much love July shows for the twisted souls she fawns over and the understanding of how phony the art world can be, but it walks on egg shells when the heavy sexual content involves those who are under-aged. Somehow it all fell together as so much ‘digital age’ poop that I couldn’t muster enough feelings to care for the two emotionally scarred lead characters I thought would be just fine either together or apart. Their story was as distant as their behavior was odd, not necessarily a bad thing but these two seemed like types who are strong enough to get what they want and their limitations only seemed like so much macaroni. The film’s most banal line has Richard telling Christine, when he notices her ankles are sore from wearing tight shoes, “You think you deserve this pain but you don’t.” Calling Dr. Phil to the rescue!!! 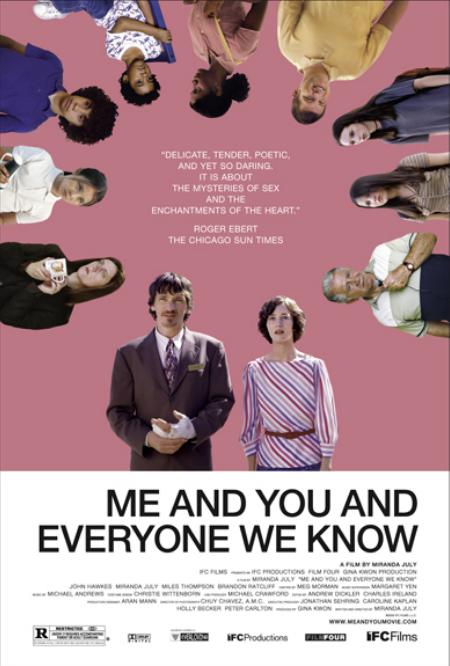