Hur Jin-ho’s (“Christmas in August”) well-observed melodramatic weepy romancer is a soul mate to Paul Cox’s intense My First Wife. Sang-Woo (Ji-tae Yu) is a socially backward handsome young sound engineer who lives in Seoul with his father, aunt and senile grandmother (his mother died when he was young). He arrives in Kangneung to work on a special assignment of recording nature’s sounds for a small radio station. At the station waiting room Sang-Woo can’t awaken the radio’s DJ, Eun-Su (Yeong-ae Lee), who will be working with him. So he calls her on the cell phone, which is a kind of a cute way for them to meet (or, maybe it’s too cute!). Immediately attracted to the divorcée, the shy lad is awkward in conversing with her as she invites him to her apartment and makes a meal of ramen. He spends the night in her place. Though she lives far away in the provinces, they begin an affair while working on the project that runs through the seasons into the following spring. While he falls passionately in love and wants to bring her home to meet his family, she quietly flips out. Perhaps still feeling the pangs from her sour marriage or just no longer feeling he’s on her same wave length as far as good sex, she suddenly dumps him. The temporal workings of passion is compared to the sounds of nature (the sound of the wind brushing against the bamboo is meant to be soothing, as is the rustling of the wind in the wheat fields, or the tingling sensation felt from the chime given off by a temple bell). As Eun-Su’s passion for him dissipates, his remains strong for her. Not able to deal with his loss, the lad goes to pieces, starts drinking and spends time alone brooding. The emphasis here is on how hurt the man can get in a relationship with a liberated woman, who is in control. The pathetic Sang-Woo makes every gesture come to life with meaning and every painful moment is heartfelt, this kind of sincerity conveyed prevents the film from going sappy or soft–something it was on the verge of doing but never did.

Hur Jin-ho in a restrained fashion traces a love affair that begins with hope but ends in doom. It’s the kind of modern feel-bad romance that resonates universally throughout the world, and offers plenty to ponder long after viewing it. It’s sublime, modest and lyrical–much like a work by Ozu, but too manipulated to fall into the realm of a masterpiece (at least, I don’t think so). Both the young lovers gave stunning performances that came from the heart, while the lush photography and evocative nature sounds were stirring. It works its magic as an arthouse film. 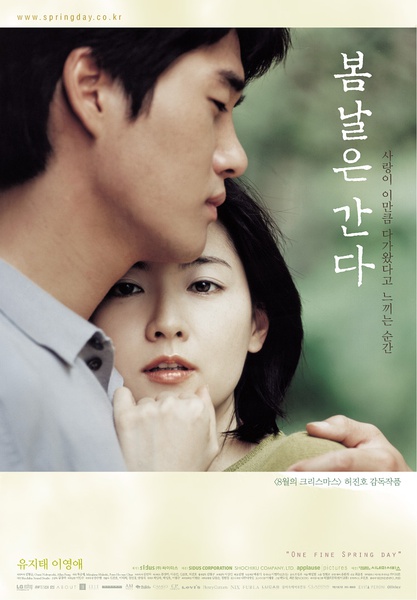