OBJECT OF BEAUTY, THE

Ne’er-do-well Jake (John Malkovich) and Tina (Andie MacDowell) are an obnoxious pleasure-seeking yuppie American couple living above their means in a swank London hotel. Jake is a struggling commodity trader, who is anguished that he’s running low on funds, is involved in a botched business deal (his dough is tied up in a lost cocoa shipment taking place in a Third World country) and doesn’t have enough to cover his mounting hotel bill. To come up with some bread, Jake urges Tina, an ex-model, to sell her valuable Henry Moore sculpture. But she refuses to part with her prized art object of beauty, a gift from her ex-husband Larry (Peter Riegert).

With the hotel pressuring them to pay the bill, they decide on falsely telling the insurance company the bronze sculpture is lost and thereby collecting on its insured value of $50,000. Unfortunately before they can act the hotel’s deaf-mute chambermaid, Jenny (Rudi Davies), steals the tiny Henry Moore sculpture, figuring the colorful piece “spoke to me” and will help cheer up her tedious life. The couple begin to self-destruct when they can no longer rely on their scam to get them straightened out financially. In the course of events, Tina suspects Jake stole it. Jake suspects Tina. While the insurance company eyes them both suspiciously.

The problem with the sleek film is that this little dilemma besetting the couple is not that interesting, at least not diverting enough to keep the film lively. The punchless comedy of manners mainly shoots for an aesthetic response to its crime scene, as it too obviously shows how the three main characters view the stolen figurine: Jake sees it as just a commodity; Tina as something personal to be treasured for the pleasant memories it brings back to her; while Jenny finds it to be something beautiful to possess as her very own. 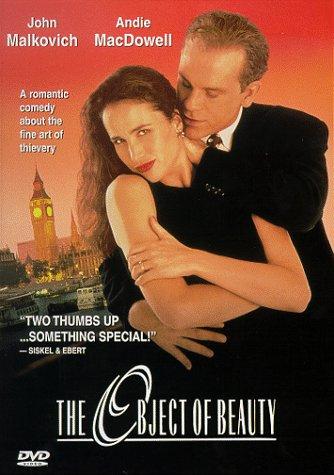