This Carrie has nothing to do with Brian De Palma’s 1976 horror film of the same title that starred Sissy Spacek. William Wyler (“The Heiress”/”Wuthering Heights”/”Jezebel”) offers a well-crafted but dry and sentimental adaptation of Theodore Dreiser’s controversial novel Sister Carrie. Dreiser’s doleful social conscious tale of an ambitious small-town girl from Missouri now living in the Windy City, who decides that living as a kept woman is a better way to the top than working in a sweatshop.

The book had a hard time getting to press because many considered it to be amoral, and after Paramount first bought the rights to the book in 1935 the Production Code Administration wouldn’t give it its consent. Wyler, who now owned the rights to the book, was eventually able to get it past the censors by getting writers Ruth and Augustus Goetz to add a more sympathetic character who would champion traditional morality, the sinner Olivier’s restaurant boss, Mr. Fitzgerald (Basil Ruysdael).

The ambitious, innocent Carrie (Jennifer Jones) in the late 1890s arrives in Chicago’s South Side and stays with her nagging dullish married sister. Carrie gets fired from her dead-end shoe factory job when the sewing machine catches her finger and breaks off a nail. She then runs for help to pushy fast-talking traveling salesman Charles Drouet (Eddie Albert), who met her on the train and slobbered all over her. She soon becomes his mistress, but falls in love with the smooth talking middle-aged married high-end restaurant manager George Hurstwood (Laurence Olivier) who would do anything for her. This gets the wealthy George’s controlling the purse strings cold-hearted wifey (Miriam Hopkins) in a tizzy and she, along with the restaurant boss, give hubby the business after he runs off with the young beauty to the Big Apple with funds he embezzled from the workplace. George’s slave-like devotion to Carrie leads to his eventual downfall and destitution, as she moves up the ladder from chorine to stage star and he ends up living in a flophouse.

Jones’ angelic characterization is far different from the book version, as she seems all wrong for the part; Olivier can’t do much in a role that doesn’t suit him, but he’s still Olivier and gives the part a smart and impassioned look; while Albert is just right for the part that needs such a brash personality.

Though it bombed with critics and at the box office, it was not a complete disaster–it won’t hurt your eyes to look at it. But it’s too diluted and messed around with to get one riled up either way about Carrie’s precipitous rise to the top and George’s fall to the bottom. It seems more bent on being a sociological study than a stirring melodrama. 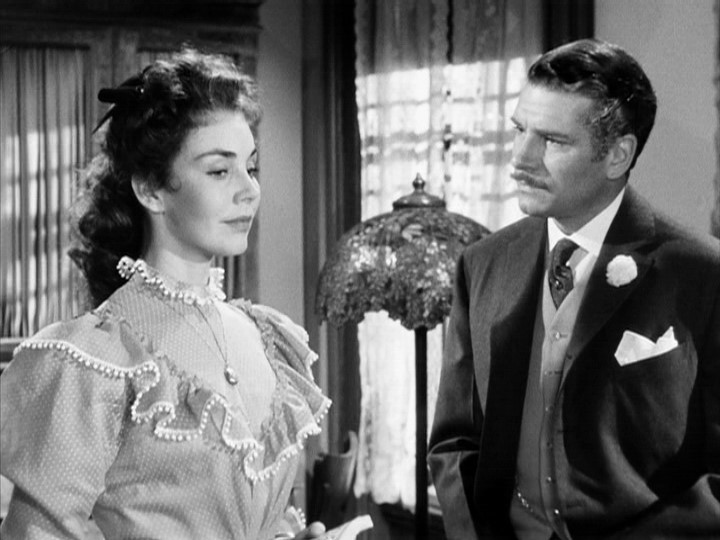