This homage to trashy pulp thrillers does some justice to its forebears, even if it lacks the acting chops, verve and atmosphere of those films. Nevertheless it’s a fun flick about playing subversive games, donning disguises and trying to rob an established secret society, the Templar, while the villain emerges from the underground to openly fight with contemporary Parisians on their streets and rooftops. The renown Georges Franju (“Eyes Without A Face”/”Judex”/”Head Against The Wall”), known for his early reprisal of the 1910 Louis Feuillade serials, returns to that medium to direct in a comic-book style this visually stunning and stylish masterful film. It’s the movie version of the TV series L’Homme sans Visage. Jacques Champreux writes the screenplay.

This was Franju’s last film for the cinema. It’s basically a reworking of his Judex (1963). The main difference is that this time around Frangu was able to secure the rights to Feuillade’s iconic character Fantomas, or more correctly had a chance to if he paid the high price for it. He’s the main character, played by writer Jacques Champreux, who is called The Man Without A Face or the Shadowman.

The wealthy writer, Baron de Borrego (Roberto Bruni), knows where the secret treasure of the Templar’s is hidden. His unfaithful servant Albert (Yvon Sarray), because of his gambling debts, is in dire need of money and thereby sells this info to an old lady in a store who when unmasked turns out to be the villainous Shadowman (Jacques Champreux).

Before the sinister masked man, the Shadowman, can steal the valued treasure of the Knight’s Templar he has to overcome those members of the 12th-century sect who still guard it.

The episodic film is fun when into its criminal schemes and the relentless pursuit of the treasure by the villain. But when the police commissioner (Gert Froebe) takes up the chase after the arch-villain, the film, shot as if edited for chapters, seems needlessly lifeless and stalls. 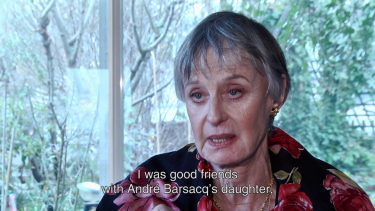