“The convoluted plot line doesn’t have enough energy to sustain interest in its story.”

A little known bleak film noir that plays out as a searing character study on loner con artist burglar Paul Gregory (George Nader). Unfortunately the convoluted plot line doesn’t have enough energy to sustain interest in its story. Seth Holt (“Scream of Fear”/”Danger Route”/”The Nanny”) directs the b/w crime drama in a routine manner, failing to give it the vision it demands. Only the jazz score by Dizzy Reece and the dark atmospheric photography of London’s back streets by Paul Beeson gives it the enhanced noir elements it requires. It’s too cleverly written for its own good by Holt and theater critic Kenneth Tynan, and is based on the novel by Donald Mackenzie. Holt was determined to make “the least Ealing film ever”, and managed to make one of its most darkest and intricately plotted films.

It opens with the Canadian Paul Gregory (George Nader) escaping from a British prison by climbing over the wall. In flashbacks, we see how the escapee Gregory is posing as a struggling playwright, in a vacant apartment apartment secured by a cohort. In retrospect we observe how Gregory managed to charm the wealthy widow Harriet P Jefferson (Bessie Love) into letting someone inexperienced handle the sale of her late husband’s valuable rare coin collection. Gregory gets a letter from the widow authorizing him to make the deal, and does so by robbing her collection and selling it without her knowledge to legit coin collectors. Gregory then leaves it in the bank’s secure safety lock box with only him in possession of the key. Figuring he’ll get a light sentence, Gregory lets the cops arrest him. To his surprise he’s sentenced to a stiff ten year term, and thereby gets his partner Vic Sloane (Bernard Lee) to arrange for the break and the aforementioned temporary apartment while he’s on the lam. When Gregory because of a problem returns the next day from the bank without the money to split with his partner, he’s beaten and the safety box key is taken away. Complications arise when Gregory unintentionally kills his partner after mugging him, and his underworld connections either shun him or betray him. The only help Gregory gets is from the impulsive Bridget Howard (Maggie Smith, her first major movie role), a neighbor in the housing complex he’s hiding out in, who knows he’s a wanted man but feels sorry for the polite troubled loner and agrees to let him hide near her family’s home in Wales. But, as the title says, the man who cut himself off from healthy human contact, has nowhere to go and when he’s gripped by paranoia he falsely thinks even Bridget will betray him to the police. 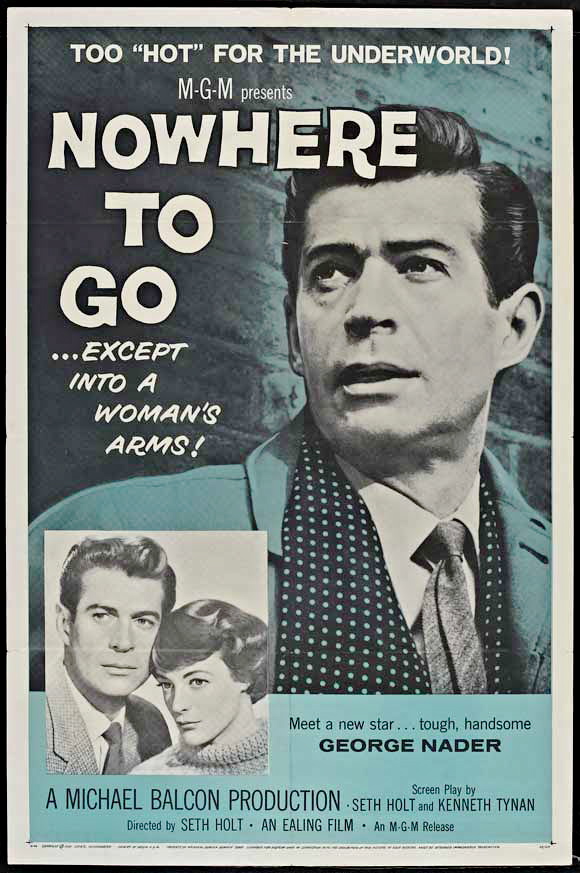