A sentimental, warm-hearted and tell-all dysfunctional Puerto Rican family holiday pic directed with ample skill by Alfredo de Villa (“Yellow”/Washington Heights”/”Adrift in Manhattan”), who keeps it filled with plenty of salsa (Latin American food and music) and tries to keep it Merry Christmas in spirit despite laying on us a number of heavy-handed dark family moments–which puts too much of a damper on things to be completely winsome. There’s also a ponderous metaphor about an old rotted tree in the featured family’s front yard that somehow none of the Puerto Ricans can bring down with chain saws or to unearth it when chained to a car, which meant to me that the film could never give us an unobstructed view of where its story was leading to.

It’s set in the Puerto Rican working-class Humboldt Park section of a snowy and frigid Chicago, where proud bodega store owner Edy Rodriguez (Alfred Molina) and his wife of thirty-six years Ana (Elizabeth Peña) are thrilled that their estranged family will be returning home to their childhood private house to spend the Christmas holidays together for the first time in three years. The oldest son is a successful lawyer, Mauricio (John Leguizamo), who is married to the high-powered Jewish Wall Street banker and soon-to-be manager of a three hundred million dollar hedgefund, Sarah (Debra Messing), and who live luxuriously as yuppies in Manhattan. The family is polite to Sarah but has never fully accepted her into their Puerto Rican clan, and Mom berates the 36-year-old career-minded professional for not having children and making her a grandmother-something she wants desperately so as to preserve her honor as a Puerto Rican matriarch. The food-obsessed and grandmother-obsessed Ana also has a nasty habit of muttering under her breath rotten things about Sarah in Spanish, which she doesn’t understand but the other family members obviously do but never let onto Sarah what their mom is really saying. The father’s favorite son, the youngster in the family, Jesse (Freddy Rodriguez), is released from the army after his battle tour in the Iraq War, and the troubled glum lad with mental scars both physically and mentally has much on his mind. Dad wants to take him in as full partner in the bodega but the still mixed up Jesse, feeling guilty an army buddy was killed standing watch in his place during an insurgent attack, wants to go on another tour of duty to Iraq. The Rodriguez’s attractive single 29-year-old daughter Roxanna (Vanessa Ferlito) is a struggling TV actress in L.A., who the family pretends is really knocking them dead in Hollywood–which she agrees to go along with so as not to disappoint them. Roxanna wrestles with whether to return to Hollywood or stay in Chicago, as she anxiously awaits her agent’s call if she got a sought after part. Uncle Johnny (Luis Guzmán) is a bachelor jokester and is around for comic relief, and is a scene-stealer who helps keep things snappy by giving the film a few yuks. Loyal bodega employee Ozzy (Jay Hernandez), a Mexican who turned his life around when quitting the gang, despairs that the menacing gang-banger (Manny Perez) who killed his brother is now free and seems to always be in his sights. Ozzy also has a secret crush on Roxanna and is anxious to make their brother-sister like relationship change into a romantic one. Also coming around the house is the single parent Marissa (Melonie Diaz), whom Jesse ditched after impulsively enlisting and who has now moved onto a relationship with nice guy Fernando (Ramses Jimenez)–who accepts her child Hector even though it’s not his (we’re never told if it’s Jesse’s). Jesse now realizes he goofed up big time by letting Marissa go, and doing this via a letter sent while in the service and not in person; and thereby walks around Chi town as a saddened lovesick pup, only finding the proper Christmas joy when partaking in the traditional caroling in the streets.

The early parts of the film are built on comedy and it flies by in a good-natured, breezy and genuine way, with the boisterous bickering siblings letting loose by colorfully dissing each other in a lighthearted manner and mom doing her cooking thing by serving up some delicious looking home-cooked traditional meals. But when the ill-conceived drama kicks in for real at the Christmas Eve dinner, things take a severe downturn. At the dinner toast Mom, for some inexplicable reason chooses this time to announce she wants a divorce from her womanizing husband. Immediately a pall takes the place of the festive mood and the mood change seems disingenuous–more manufactured than natural. If that wasn’t enough of a plot contrivance, dad has a secret fatal illness, marital problems with Mauricio and Sarah over when to have children must be ironed out and other long-standing family resentments surface, all of which never really get resolved or get fully explored but rather in a shoddy fashion get wrapped up in a seemingly artificial way like unneeded gifts recycled from a number of other forgettable Christmas pics.

It’s fairly harmless as familiar–only with a Spanish twist–crowd-pleasing comical entertainment. But the dramatics are more cliché-ridden than gripping and never could adequately be blended into the lighter moments of banter to make the film come together as a fully realized work. 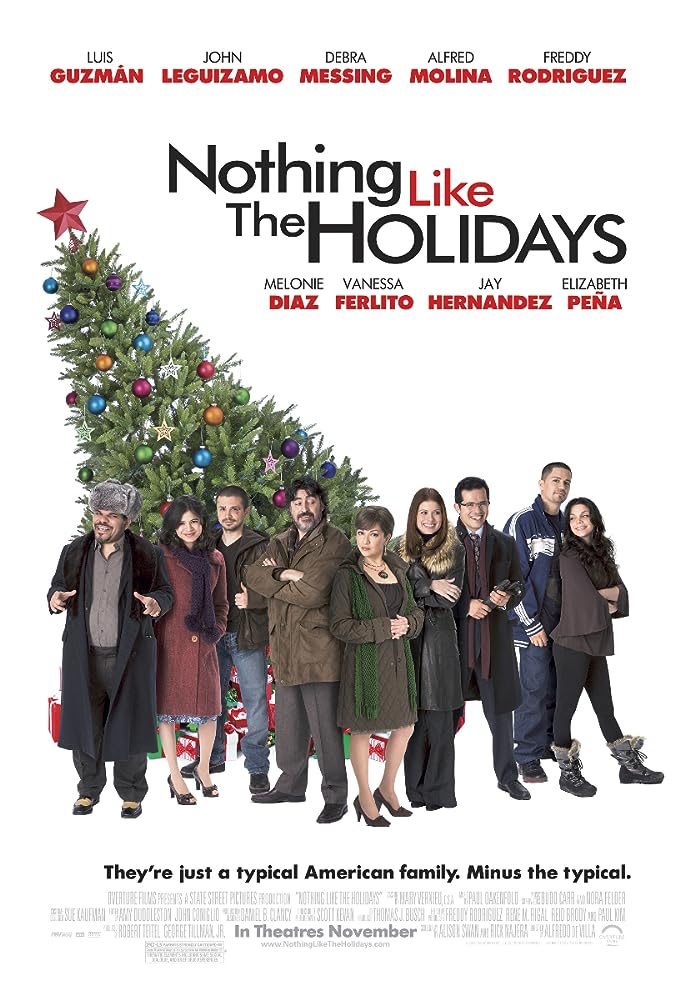