NOTHING BUT THE NIGHT (aka: THE DEVIL”S UNDEAD/THE RESURRECTION SYNDICATE)

Convoluted murder mystery with unconvincing supernatural threads, that is uninviting thriller fare. It was the first and last film made by Christopher Lee’s own production company called Charlemagne. The cult immortality story is based on John Blackburn’s novel Children of the Night. Director Peter Sasdy (“The Lonely Lady”/”Countess Dracula”) can’t bring clarity to the muddled story, in one of his lesser films. At least its less violent than other Lee horror films. Colonel Bingham (Christopher Lee) is the Scotland Yard investigator who enlists the help of his pathologist friend Sir Mark Ashley (Peter Cushing) to help uncover the mysterious suicide deaths of three wealthy trustees of an orphanage. When a coach crashes outside London, it leaves an orphan girl passenger, Mary Valley (Gwyneth Strong), suffering from suppressed psychological pains. It seems odd that the wealthy Van Traylen Trust, the same fund of the recent mysterious suicides, had three trustees aboard during the crash. The hospital doctor treating the girl, Peter Haynes (Keith Barron), senses that something is seriously wrong mentally with Mary. But the girl insists on returning immediately to the bucolic orphan home, Inver House, in Scotland. When her real mom Anna Harb (Diana Dors), a violent prostitute who served time for multiple murders makes a noisy fuss about being denied the right to visit her daughter and threatens the trustees for turning her girl against her, reporter Joan Foster (Georgia Brown) senses a story and teams with Dr. Haynes to talk with mom and arrange a visit to her daughter at the hospital. Spoiler. When more suicides among the trustees occur, the trail leads the cop back to the orphanage at Bala, where it’s uncovered that the 12 aging trustees are seeking immortality by injecting the 12 orphans with a memory serum of the trustees so that the children will become the trustees. The absurd plot is awkwardly executed as a children’s revenge story. It also lacked the proper horror pic atmosphere and suspense to find favor as escapist fare for horror fans. 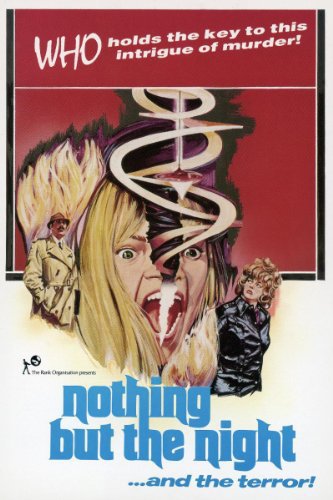