“I predict you will not find much enjoyment or gain much intellectual satisfaction from this film.”

Nostradamus is a dull telling of a supposedly exciting visionary figure of the 16th century. The filmmaker, Roger Christian, took the magic out of Michel de Nostradamus (Tchéky Karyo) and made him into a sensible figure of the dark ages and not like the controversial genius he was supposed to be. The prophet’s sexiest prediction is of the death of France’s adulterous King Henry II in a joust. This makes his wife Catherine De Medici (Plummer) quite pleased. She even saves Nostradamus from the Inquisition when he’s accused of a crime against God for manipulating the king’s death. His predictions of the future are seen when he has fainting spells, rolls his eyes as if he’s going into a swoon, or becoming dizzy looking at water in a basin. He envisions the horrors of the 20th century and sees Hitler and the rise of Nazism and sees Saddam Hussein’s face in the water basin. In this dry story line, none of the controversies that followed the prophet through the ages are brought up for discussion. After all, he wrote volumes of undecipherable prophetic poems, so you would think this would be at the heart of the film. Instead we get a loving family man who is hardly ever with his family but busy fighting against the stupidity of the church and the ignorant medical profession. Some may think of him as either a real prophet or a charlatan, but this film portrays him as a good citizen and a respected man of science like Jonas Salk.

Nostradamus was born in 1503 and died in 1566. His family hid that they were Jewish by being baptized as Christians, something they had to do to avoid the Inquisition. After seeing much suffering and persecution in the dark period of French history, he studied medicine as a young man in Montpellier. Unsatisfied with the current medical treatments, which subscribed to church doctrine, he used herbal and hygiene treatments with great success to fight off the bubonic plague and other illnesses. This earned him a reputation as a risk-taker and a formidable scholar and physician. The filmmaker uses unimaginative formulaic devices to show that our student seer knows more than his teachers about medicine.

After becoming famous for his treatments, Nostradamus was invited to study with the noted arcane scholar and physician of an unnamed cult group, Dr. Scalinger (F. Murray Abraham). Nostradamus took a secret oath to study banned books and learn more about astrology, the occult, and herbal treatments. He also met his wife Marie (Ormond), who was a student of Scalinger’s but was not allowed access to the secret books.

Unfortunately Nostradamus was not able to save his wife and children from the plague. It was also unfortunate that he had to meet a blabbering mystic (Hauer), who appears before him in the dark with a row of lit candles around his brimmed hat. The mystic had a different rhythm than anyone else in the film, which made his presence seem oddly foolish.

For a second wife, the seer takes a young Spanish widow, Anne (Assumpta Sterna). Nostradamus now follows the advice of Scalinger and more carefully observes his dreams and writes down his prophesies.

The only thing this film did that was satisfactory was evoke Nostradamus’s historical period with clarity. Otherwise, I predict you will not find much enjoyment or gain much intellectual satisfaction from this film. 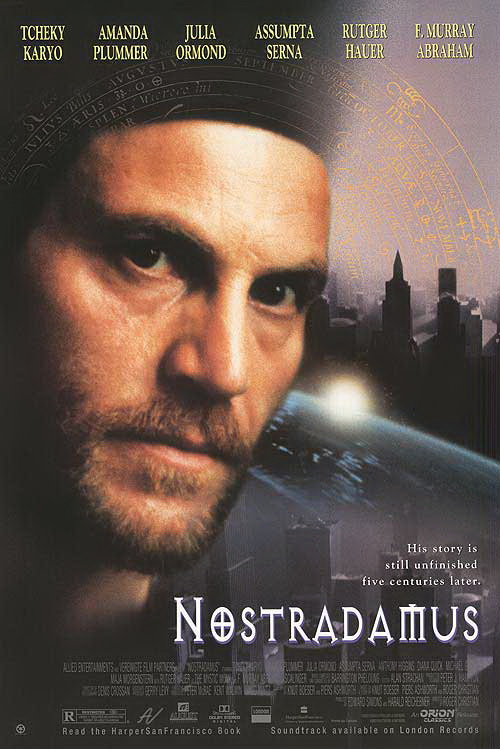