Former Victoria’s Secret model Trish Goff makes some noise starring in this psychological thriller. The idie film is something out of Kafka; it takes a maddening common quality of life situation for New York City residents and pushes it to extremes. Writer-director Tony Spiridakis keeps it urban, claustrophobic, and menacing throughout. Writer Lance Doty adapts it from the book by Diana Ramsay.

Joyce Chandler (Trish Goff) has recently divorced husband Elliott after her abortion and alcohol problems, and feels lucky to have found a promising comfortable Manhattan apartment facing away from the traffic and one the landlord assures her is safe and quiet. She also lands a job as a copy editor for Gotham magazine, where she tells her female boss (Jodie Markell) “I live for exactitude.”

Things immediately go wrong the first night alone in the apartment, as Joyce is kept awake by strange sounds coming from the stereo and foot stomping of her upstairs neighbor Charlotte Bancroft (Ally Sheedy). Joyce writes a note and the neighbor apologizes for keeping her up all night. But that night the noises only intensify, even after Joyce bangs on the ceiling and calls the cops. The noise becomes a regular nightly ritual and is driving Joyce mad. Work turns out to be just as tense, as Joyce gives others the impression she’s too good for them and they find her work too picky. Meeting with a divorcee women’s group, Joyce feels humiliated by them as they press her to tell about why at six she no longer played with dolls. It leads to her telling them about her parents dying at that time in a car accident and then living unhappily with her strict but fair aunt, who did not permit her to have a doll. After telling them off as being in a psychological mess, Joyce storms out of the meeting.

Complaining to another neighbor (Giancarlo Esposito) about her noise problems, he suggests getting tough with the noisy neighbor. Joyce’s academic ex-husband is willing to give her money to find a new apartment but can’t see her because he’s involved in another live-in relationship. Out of desperation Joyce meets with Charlotte but finds that the woman is a little off and in desperate need of a friend, and Joyce is not willing to be a friend or play shrink. She finds nothing in common with the woman even though they are both single, lonely, and work for publishing firms as editors. Exhausting her rational options, Joyce places a salacious ad in a sex rag for Charlotte. This draws many male visitors to Charlotte’s flat, and one night she gets severely beaten. While Charlotte’s in the hospital for two weeks, Joyce enjoys the quiet but returns to the bottle–drinking alone at home every night after a frustrating bar scene experience. After given a forced non-pay week’s vaction, when Joyce returns to work she learns she’s been fired.

By this time we are led to believe that Joyce has lost her grip on reality, and it leads to dire consequences for the ever threatening Charlotte who has returned. During its best moments Noise reminded me of Polanski’s The Tenant, a chilling urban paranoia story in the same mold. For those who understand the value of Peace and Quiet, the film should hit a raw nerve. Nothing about the heroine’s aloof attitude prior to the stunning climax could take away from my sympathy for her. 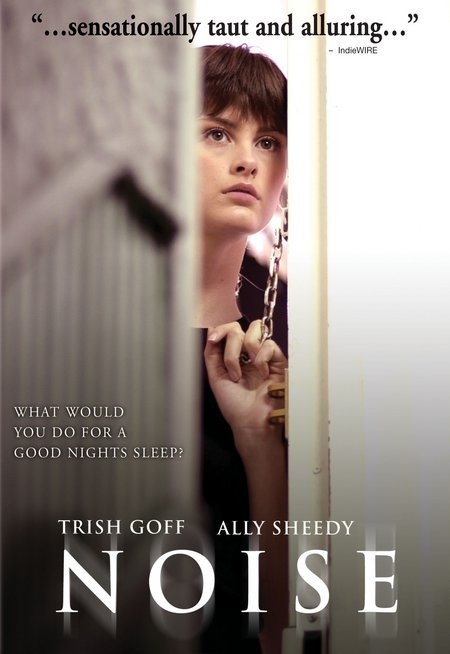