A sympathetic and compelling look back at the young Bob Dylan from 1961 to 1966 when he first moved to Greenwich Village, New York, from Hibbing, Minnesota, to pursue his musical ambitions. The poet singer made a big splash on the American scene with his early protest songs and the ever evolving artist after becoming a folklore icon will change from acoustic to electric guitar and lose some of his fan base who called him a traitor for selling out his folk music roots. All the catcalls at the 1965 Newport Folk Festival (filmed by Murray Lerner) and during his British 1966 tour (filmed by D.A. Pennebaker) seemed to shake Dylan up, but he still stoically performed as the booing seemed to renew his convictions in his work. In these amazing scenes we see before us what it takes to be an artist who goes out there on his own. The poet of that generation Allen Ginsberg generously said “I heard ‘Hard Rain’ and wept. … It seemed the torch had been passed (from the Beats) to a new generation.”

Martin Scorsese’s sincere documentary, showing off the noted filmmaker’s talent as a storyteller, makes some cracks in Dylan’s mystique without trying to do any more than letting his story come out as is. It does it by showing archival footage never before made public of the baby-faced radical singer, while the current weather-faced 64-year-old Dylan responds to the film clips in a straightforward manner not playing his usual games to duck questions. The interviews were conducted by longtime colleague Jeff Rosen, which take place over a period of ten years. On top of that, there’s comments from his artistic inner-circle members from those early days who are lucid in their responses and provide us with a clear picture of the ambitious Dylan as he clawed his way to the top, playing in coffeehouses and popular places at the time such as Gertie’s Folk City. The film also covers Dylan’s life in the rural environs of his Hibbing mining town, where his dad owned an electrical store. A few high school friends paint a picture of him as a restless kid itching to move on to greener pastures from such staid surroundings. Dylan conveys he was an avid radio listener back in the 1950s influenced by the likes of Hank Williams, Webb Pierce, Johnny Ray, Muddy Waters and Gene Vincent, while the town folks were listening to Patti Page’s “How Much was that Doggie in the Window.” After leaving the University of Minnesota, where he did not attend classes in his freshman year, he changed his name from Robert Zimmerman. Not confirming if he took the name from the Irish poet Dylan Thomas, he only states the past didn’t mean much and the musical scene in New York City meant everything so a change of names was in order. Dylan was some one who reinvented himself constantly, and started the process rolling by being an impersonator of the ailing radical folk singer Woody Guthrie.

At the Newport Folk Festival, Dylan is referred to as having his finger on the pulse of his generation. Liam Clancy of the Clancy Brothers says he was able to articulate what the rest of us couldn’t say. A folk singer who knew him back then, Dave Van Ronk, says he tapped into the American collective unconscious.

Whatever. The changeable Dylan (always the trickster) was able to move from acoustic folk singer to electric rocker to keep growing as an artist not afraid to take chances, for which some of his fans could never forgive him but he also gained more fans he would have never have reached. His brave backup band during the British tour went onto fame and became known as The Band. Footage of Dylan shows the unflappable singer complaining to The Band that it’s hard to tune his instrument with all the boo birds.

Both the footage of Dylan performing at various concerts and the wide selection of songs are an unforgettable treat. The songs include “Mr. Tambourine Man,” “Chimes of Freedom Flashing,” “A Hard Rain’s A-Gonna Fall” and “The Times They Are A-Changing.” The film’s title is snatched from lyrics from his “Like A Rolling Stone,” featured in his Highway 61 album which indicate even though the singer wants to go home there’s no way of him going home until he dies. The lyrics are “How does it feel How does it feel To be on your own With no direction homeLike a complete unknown Like a rolling stone?”

This is an outstanding documentary, taking Scorsese and his able team led by editor David Tedeschi 31/2 years to put together, that reflects a time when things were tumultuous and someone like Dylan burst on the scene with something to say that had to be heard. Dylan thought he could change the world with a song, but turned the corner and kept evolving as an artist and in turn was a great influence in shaping the American music scene. The narrative ends with Dylan’s July 1966 motorcycle accident, whereby he stopped going on tour for the next 8 years. 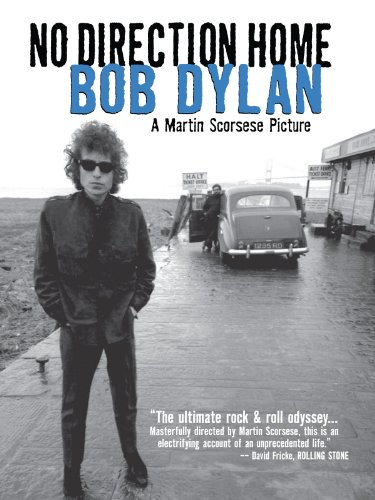