The director has gone after style and has thrown substance out the window. “Nobody” is a bloodthirsty revenge film based on a childish incident in a nightclub, where three yuppie office workers make fun of the way three men at the next table are dressed. A war of words escalates into an ugly scene of macho posturing and finally into gore. The three stylishly-dressed ad executives are: Taki (Kato), who is prone to wearing Hermes ties and acting cool; Nambu (Takeuchi), who is the one who is the most bellicose; and, Konishi (Nakano), who is bespectacled, fearful and pudgy. They leave the bar after the other table answers their taunts. When Konishi returns to get his umbrella he is set upon and has a broken bottle smashed over his face.

The film takes this childish revenge-fantasy into an unbelievably crude depiction of gun fights, arrow attacks, knife and fist fights, and a scissor attack. All the fight scenes were choreographed and looked as phony as Confederate money. The protagonists were three unlikable snobs concerned only with their image, talking about name-brand products as if someone was an idiot who didn’t adhere to their tastes; and, they got into the tussle because they were loudly attacking the other table for being tacky.

This film has nothing to say about these faceless executives or their counterpoints, who up the dissing ante into physical violence. Guessing if the antagonists are office workers, yakuza, or police, provides for the mystery. The paranoid thriller is calibrated to show how the men feel when their masculinity is questioned.

Not able to forget the attack on Konishi, even after he is released from the hospital and is walking with his pals down an alleyway, the men recognize the Rolex watch guy and pounce on him, supposedly beating him to death.

But then things take a harrowing turn, as the men each receive phone calls threatening revenge for the death of their friend. To their surprise there is ‘no body’ reported found, and the police are not looking for them. The menacing caller tells them, he is not concerned about telling the police, he’ll take care of the problem.

Poor Konishi is severely worked over and sent to the hospital again, this time with scissor wounds to the stomach, when he agreed to meet the threatening caller. Nambu is later attacked with arrows and slain.

Taki picks up a girl on the rainy road, Rika (Hiromi), with whom he has a quickie. He is supposedly serious about his workplace girlfriend, Reiko (Yumi), but finds time to play even when he is scared to death. He probably does it to take his mind off those coming after him. With the death of Nambu, Taki goes to the police and tells them the truth. But they can’t help.

The main villain, the guy with the Zippo lighter, meets up with Taki and they have one of those ridiculous Hong Kong gunfights. Zippo is one of those villains who just can’t seem to die (I suppose he’s supernatural!). It’s all pointless and bloody. Detective Karaki (Nezu) says that the attackers are part of a new Japan where punks who used to become part of a yakuza crime family now become businessmen.

Shundo Ohkawa’s direction is glossy and high-tech, but suffers because it’s amateurish. The film is overrun with trick camera shots to capture all the violence. The director’s color scheme was nightmarish and depressing, some scenes were smothered in metallic blue shadings.

The film was about as uninspiring as reading GQ. The only fun I had was in the opening scene, watching the two tables trade smart-alecky digs at each other. 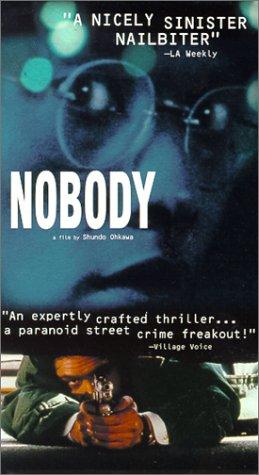