Has anyone ever heard Rita Pavone sing? That’s the red herring question asked that no one in the film answers. It is placed on the plate to get the suckers (viewers) in the mood for some shady business…in an Argentine thriller that’ll remind you of countless American films about the confidence racket. Since this film is South American, it has a slightly different flavor than the American ones — as it is supposedly harder to tell who is conning whom. This first-feature film of Fabián Bielinsky (he worked on commercials and television in Argentina for more than 20 years) is directed with a Hitchcockian verve, but at times it is too cute for its own good. According to Variety, there were some 350 screenplays submitted in an Argentine competition on a talent search mission, and Bielinsky’s script won and he was given funds to make this film. It’s inspired by David Mamet’s “House of Games,” though the dialogue is not as crisp as his — but the plot twists are. It plays as a jolly seminar in con games, as almost everyone in the film is an artistic schemer and hardly worthy of trust. What is supposed to hold your attention is guessing what the con is and who is getting conned. If that’s enough to make your day, then the film excels as it presents enough cons to choke the same horse again and again.

When Juan (Gastón Pauls) pulls a bill-changing scheme twice in a gas station convenience store in Buenos Aires, he appears to be a novice grifter and is caught by the store manager as the girl behind the register returns from her break to point him out as a thief. But to his rescue comes another low-rent con man, Marcos (Ricardo Darín), who poses as a cop and arrests him to get him safely out of the store. The two then showboat their talent as they seem to hit it off, as they each work a number of non-violent hustles. Marcos appears to enjoy being the teacher of the less experienced Juan, and seems to believe that he’s not an ordinary thief because he abhors violence. He connects in this regard with the gifted novice Juan, as both view themselves as artistes and take great pleasure in the finesse they use to pull off a job. Their sudden partnership for the day, happens because Marcos doesn’t like to work alone and his regular older partner has disappeared.

The viewer gets a nifty tour of a modern city with a snazzy subway and a long look at a swanky glass-and-steel hotel where Marcos’ sexy but spiteful sister Valeria (Leticia Brédice) works as a hostess. His hero worshiping younger brother Federico also toils here as a bus boy for his keep. It’s here where Marcos meets up with an old partner of his he once swindled, a forger who possesses a sheet of nine faked rare stamps from the Weimar Germany — the nine queens. But the 73-year-old forger is in the middle of a heart attack and reluctantly takes Marcos into the scheme as a partner.

This shell game comes to its point when the two con men partners get the forger’s elderly wife (Juárez) to give them the forged stamps that they must sell in one day to a corrupt multi-millionaire businessman, Vidal Gandolfo (Abadal), who is being booted out of the country tomorrow. He is staying at the same hotel where Valeria works. There are many plot twists and everything changes as fast as a three-card monte shuffle, but greed remains the common ingredient that gets to everyone who wants to get fast money the illegal way. The plot thickens when the fake stamps are stolen by guys on a motorcycle who snatch it out of Marcos’ hand, requiring Marcos and Juan to con the owner of the real nine queens out of the original stamp collection in order to sell them to Gandolfo. The real stamp owner is a greedy widow (Berenguer), who is accompanied by her much younger bleached-blonde boyfriend (Falcone) when she’s confronted by Juan and Marcos. This new arrangement requires Juan and Marcos to each put lots of their own money into the investment in order to make the deal, as the hustle now takes on a different light in this once in a lifetime deal for a half million dollars.

Deception and duplicity covers the storyline, as it supposedly becomes difficult to figure out where this hustle is going (though if you’ve seen enough movies like this you’ll probably figure it out after a few minutes). The film sort of winks at you to see if you can follow all the hustles, and if you do you deserve to receive your ‘grifter film diploma’ for recognizing the finer points in a con. This film seems to believe that’s an art form, worthy of great appreciation from the viewer. I think the script’s a hustle, but only a harmless one that results in a diverting film that acts as a public service reminder for the public to be wary of anything that sounds too good. The film had enough going for it to eke out from me a marginal ring of approval, though my head was starting to spin from the thrills I was expected to get by seeing a good old-fashioned non-violent con going down. 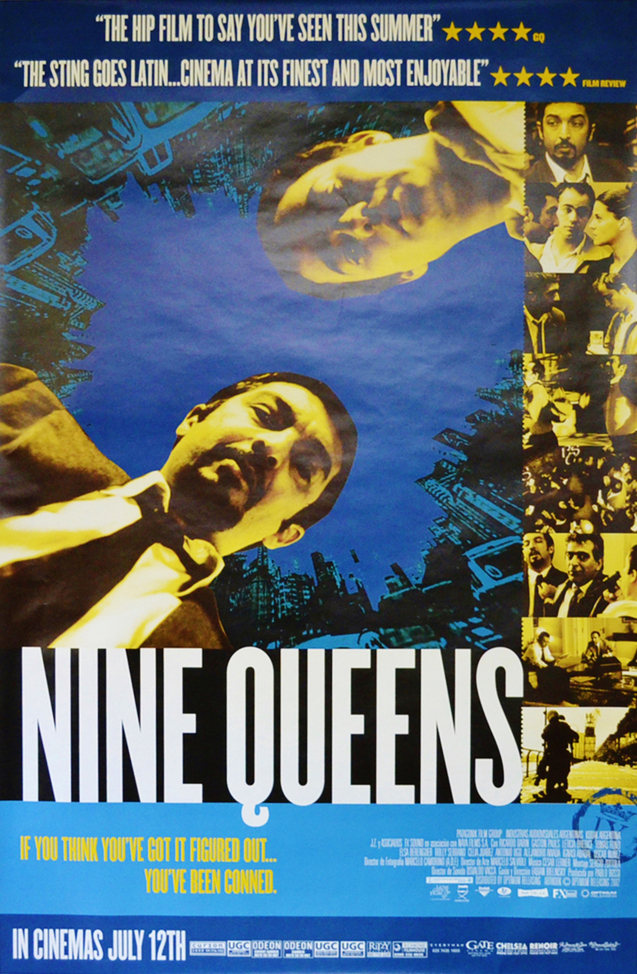