NIGHT THEY RAIDED MINSKY’S, THE

“It truly captures the spirit of an entire way of life that no longer exists.”

A well-realized backstage look back at burlesque in 1925 on the Lower East Side of Manhattan, as performed by Minsky’s at the National Winter Garden theater. The film is filled with period charm, nostalgia, slapstick vaudeville comedy and a great affection for the seedy setting. Bert Lahr died while filming; Elliott Gould made his film debut playing Billy Minsky; and Rudy Valle narrates and sings a few tunes.

Director William Friedkin (“The French Connection”/”Cruising”/”The Exorcist”) shoots it as a labor of love and provides a thrilling kaleidoscope of the era with some very entertaining skits that bring the old days to life. Though a rambling mess and the plot line is thin, those old faces from yesteryear were a true delight to see as were those animated pudgy chorines. It truly captures the spirit of an entire way of life that no longer exists, and not many are still around to remember those days in person.

It’s based on the book by Rowland Barber and written by Arnold Schulman, Sidney Michaels and Norman Lear.

Young Billy Minsky is a nervous man in danger of losing his burlesque show because his orthodox Jewish father Louis (Joseph Wiseman), who owns the theater, disapproves of the bawdy antics. He’s threatening not to renew his son’s lease, but is willing to sell him the theater for $190,000 (after all business is business).

Billy is also being harassed by Vance Fowler (Denholm Elliott), a member of the Society for the Suppression of Vice, who wants to shut down the theater because of the show’s lewdness. It looks like lights out for young Minsky when the local bootlegger gangster, Trim Houlihan (Forrest Tucker), refuses to partner with Billy and buy the theater from the elder Minsky.

A twentysomething Pennsylvania Amish woman named Rachel Schpitendavel (Britt Eklund) arrives on the scene to be a dancer after running away from her strict father (Harry Andrews). She gets the attention of old timer vaudeville performer Professor Spats (Bert Lahr), forced into retirement but still begging for parts, who takes her backstage where the show’s partner comedian top bananas, the sleazy straightman Raymond Paine (Jason Robards) and his fall guy Chick Williams (Norman Wisdom, British music hall vet), both fall for her and battle for her affections.

The scheming Ray believes he can save the theater from the censors by doing a special midnight show featuring the vulgar dance of Mademoiselle Fifi, the French heroine of popular pornographic literature and billing her as “The Girl That Drove a Thousand Frenchmen Wild.” The catch is that Rachel will play Fifi and instead of a bawdy number will do a mild biblical dance, as this will embarrass Fowler as the police will have no reason to raid the joint. The slick Ray figures the good publicity will get the public behind Minsky’s and his job will be saved.

But complications arise when Rachel’s fundamentalist dad arrives and threatens if his daughter is not on the midnight train with him to Pennsylvania, she will no longer be considered his daughter. Also Ray has a change of heart for the sweet innocent and tries to talk Rachel into going back home. But the determined girl defies everyone by going on stage and accidentally does a strip, which becomes the first striptease in Minsky’s. When the police pull off their raid, the appreciative crowd cheers Rachel and a star is born.

The atmospheric songs include “The Night They Raided Minsky’s,” “Take 10 Terrific Girls, but Only 9 Costumes,” “You Rat, You,” “How I Love Her,” “Perfect Gentleman,” and “Penny Arcade.” 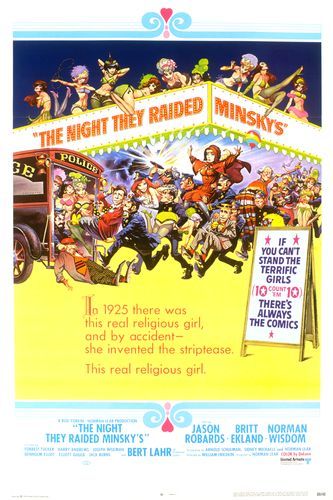 I’VE LOVED YOU SO LONG

DIVORCE OF LADY X, THE