NIGHT OF THE IGUANA, THE

Night of the Iguana is based on a morality play by Tennessee Williams. Writer-director John Huston (“Wise Blood”) filmed this powerful psychological drama in Puerto Vallarta, Mexico, and in black-and-white. It stars Richard Burton as Rev. Shannon, an alcoholic defrocked minister (the result of a sex scandal), who ekes out a living as a seedy tour guide. He’s escorting a bus full of American lady teachers across Mexico, and guides them to a rundown hotel in west Mexico owned by buxom widow Maxine Faulk (Ava Gardner). Sue Lyon is the lustful 18-year-old nymphet under the care of the teacher group leader Grayson Hall, who acts to get Burton fired for sexual misconduct with Lyon. Artist Deborah Kerr stays at the hotel with her ailing, elderly poet grandfather (Cyril Delevanti), and is attracted to Burton despite their different personalities. Her sexual repression is contrasted with Ava’s looseness, Lyon’s aggressive sexual appetite and Burton’s besotted rep. In this sea of sexual tension, all the leads are struggling with their inner demons.

Burton, Huston, and Tennessee Williams make for an oddly interesting trio of artists in a film that raises questions of faith, sexuality, life purpose, and duty. “Iguana” is noteworthy for Burton’s acerbic performance and Ava’s seen-it-all portrayal of an earthy lady. 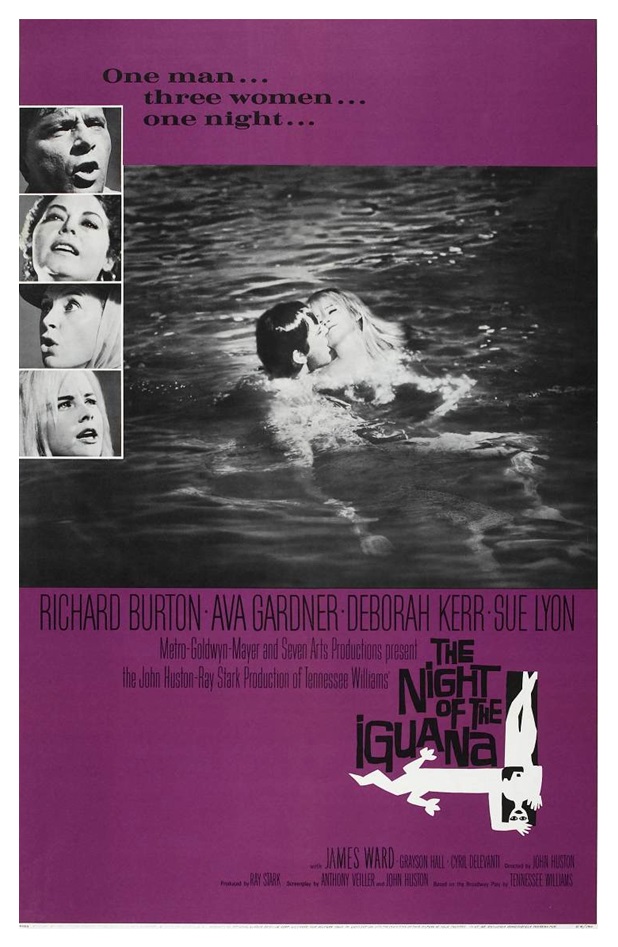