Internationally acclaimed humanistic Iranian director Jafar Panahi (“The Circle”/”Crimson Gold”/”The White Balloon”) helms this engaging, insightful, and crowd-pleasing comedy sports drama that was winner of the Silver Bear at the Berlin Film Festival. It’s a good-natured tale that pokes fun at how the current Iranian regime keeps women down as third-class citizens. Using nonprofessional actors and cowriting with Shadmehr Rastin, the often banned director in his country (all his films are almost impossible to see in Iran except through bootleg DVDs) fashions from a simple soccer story a cleverly low-keyed political allegory tale about the absurdity of banning females from attending sports events.

Tehran is excited about the big game in the 100,000 Azadi Stadium, as Iran’s national team is playing against Bahrain to determine who will qualify to appear in the 2006 World Cup. According to Islamic custom only men can attend these games (it’s explained by a soldier, because men curse during games and women shouldn’t have to hear such profanity). One inexperienced girl soccer fan rides to the game in a bus filled with fanatical chanting young men fans and after paying an inflated price to a scalper for a ticket, is stopped at the gate when squeamish about being searched by a male security guard and is held with five other teenage girls dressed as boys–some with faces painted in Iran’s national colors. The six girls are confined to a makeshift holding pen just outside the stadium walls, where they are guarded by mostly rural soldiers who are about their same age. The soldiers are not happy about the assignment and seem to be trapped just like the girls into obeying an absurd law. For the moment the duty bound soldiers and the rebellious women prisoners are adversaries, but the men soon look upon them as their sisters and wish to protect their virtue (there’s an hilarious scene of a soldier escorting one of the females to the toilet and having difficulty keeping the men out, as the problem is that there are no toilet facilities for women in the stadium). The viewer, like the confined girls, never sees the soccer game, which becomes an important plot device decision to tell us how closed the country can be to outsiders. What it does show is how the soldiers argue, chit-chat, share dreams and a sense of national pride with their spirited lady soccer fan prisoners. Though everything seems giddy in this cinema verité presentation, things suddenly change when they are sent by bus to the Vice Squad and several girls now realize the danger of their lighthearted rebellion might come with a big price and begin to cry. But the film ends on an upbeat note, as the girls humanize the soldiers and the overjoyed street mob embraces both the girls and soldiers into their spontaneous victory celebration. This metaphorical mob scene is Panahi’s optimistic vision for the country to come to its senses through a universal liberation from their oppressions, as it shows how sports can unite people and nationalism can be used to gain freedom for all people in Iran.

The title comes from a soccer term, which means to have broken the rules by crossing the last line of defenders without having the ball. Panahi’s heroines have similarly crossed the line of Iranian social order, but their infraction still scores for their side points with the people. 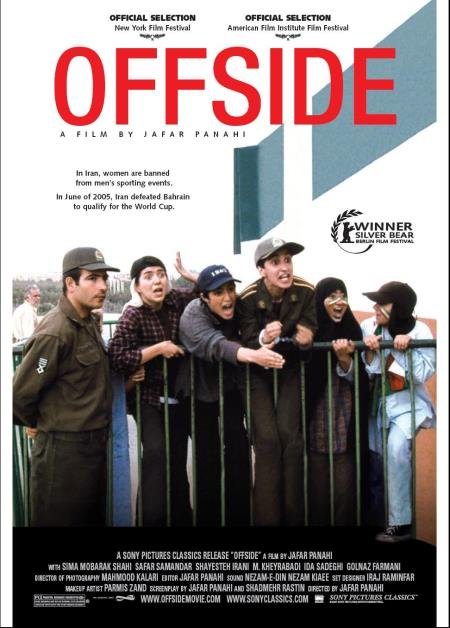