“The anti-hero wacko is played to the hilt by Jake Gyllenhaal.”

Dan Gilroy in his debut feature gives us a well-crafted story about a creepy protagonist who is similar in temperament to the Taxi Driver (1976) loner anti-social wacko Travis Bickle, played to the hilt by DeNiro. Here the anti-hero wacko is played to the hilt by Jake Gyllenhaal, but the performance doesn’t lead to us knowing more or caring more about the disturbed character he portrays. Writer-director Gilroy keeps it cynical of the media, who care more about what the news can do for them than on the reported tragedies. In that sense, it follows along the lines of Billy Wilder’s The Big Carnival (1951).

The dark thriller is set at night in a gloomy and unsettling contemporary Los Angeles, among opportunistic videographers of accidents, fires, crimes or other shocking disasters that can be sold to TV news. The fast-talking socially awkward guy with a million tics, Louis Bloom (Jake Gyllenhaal), is a ruthless petty thief in search of a legit career to fulfill his self-created strong work-ethic, learned from self-help tapes on the Internet. Louis accidentally stumbles one night upon the career opportunity of his life to be a nightcrawler (those bottom-feeders who sell their breaking news videos to mainstream TV programs) when he encounters freelance camera man Joe Loder (Bill Paxton) at the site of a deadly freeway car crash and decides to be one of them, working as an independent. The enterprising Louis gets his video equipment and a police scanner after pawning a bike he stole and then hits it off with a harried local TV news director, Nina (Renee Russo, the director’s significant other). She’s also a loner and is last in town in the rating wars, and is in desperate need for exclusive disaster videos or else she will likely be terminated.

We’re told the public’s appetite for such trash news is enormous, and that it takes a sociopath like a Louis Bloom to get that kind of news he either finds or creates. The monster is fueled by society’s feeding frenzy for seeing the most shocking news and by the TV news departments for living by the ugly motto of “If it bleeds, it leads.”

After witnessing Louis’s deplorable lawless actions while covering a brutal triple murder in a suburban home invasion, the deviant misanthrope evolves into a completely contemptible sociopath.The problem for me with the pic is that by wagging its finger of blame at viewers and TV providers for the poor quality of the news we are fed on a daily basis, it follows up with no breaking news stories on an already familiar subject and hypercritically its entertainment value is mainly over Gyllenhaal’s gleefully grotesque performance in getting the news we are supposed to shun. 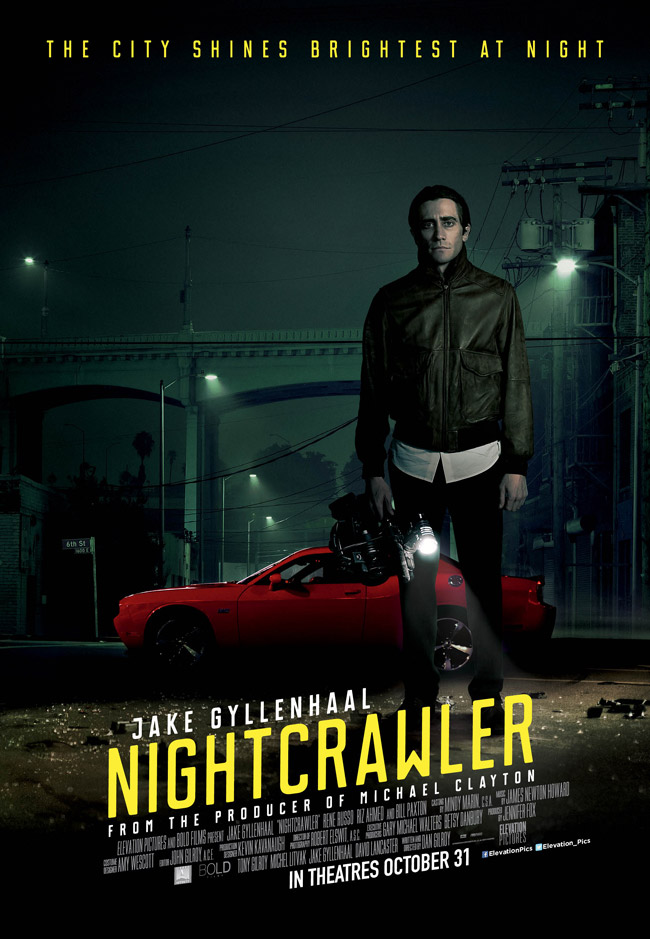