An edgy George Loomis (Cotten) can’t sleep and wanders aimlessly along the banks of Niagara Falls on the Canadian side of the border and returns to his motel cabin, where he observes his much younger and very sexy wife Rose (Monroe) as she sleeps.

A young couple, on their belated honeymoon, just arrive from the Midwest to stay in the same motel cabin as the Loomis’. Polly (Peters) and Ray Cutler (Adams) are a satisfied middle-class couple, excited to be tourists and eager to enjoy the falls. He works for a cereal company in Ohio whose main factory is on the New York side of the falls, and he just won this vacation for a catchy advertising slogan he submitted. He also hopes to meet the big boss of the cereal plant, Mr. Kettering (Wilson), and try to advance his career. The couple is ready to move into their reserved cabin that overlooks the falls but the Loomis’ haven’t vacated; Rose complains that she can’t move her sick husband at present because he’s sleeping, something he rarely does because of his ailment. She also mentions that her husband was just released from a veterans mental hospital. Mr. Qua (Collins), the motel owner, reluctantly gets the couple another cabin, as Polly doesn’t want to disturb someone who’s sick.

While the Cutlers are touring the falls, Polly spots Rose smooching with her lover (Allan). Later on, at the motel, Rose joins some young dancers at the motel and asks them to play a record called “Kiss.” She’s overdressed or under-dressed, depending on how you look at things, as she wears a sultry red, low-cut evening dress, which prompts Ray to say, “Hey, get out the fire hose.” Upon hearing a song that brings back bitter memories George, in front of the dancers, breaks the record in a fit of anger and cuts his hand. Polly patches up the cut and George tells her how he met his saloon waitress wife and how she’s a tramp and that since he married her his life has gone downhill due to his concern about her unfaithfulness. But he loves her so much that he can’t leave her.

Rose’s diabolical plan is to have her boyfriend kill her distraught husband and dump his body over the falls to make it look like a suicide. But things backfire when the boyfriend comes after George with a wrench, but is overcome by him. The action takes place offscreen. George leaves the sightseeing area by taking the boyfriend’s clothes, hoping that he will be taken for dead and he therefore would be able to freely go after his wife.

When Inspector Sharkey (O’Dea) asks Rose to identify if the body found by the falls is her husband’s, she faints. A little later, Polly spots George in her room thinking his wife is there; but Polly can’t convince her husband that she wasn’t having a nightmare, that she really saw George. She will later call the police even though she’s sympathetic to him, but she’s afraid he will kill his wife.

Some viewers might consider Niagara more of a steamy melodrama than a noir, but it does have all the dark ingredients fitting a noir film: an innocent who is uncontrollably overtaken by a lust that consumes him, while his femme fatale wife is a heartless schemer with a large sexual appetite. This was Marilyn Monroe’s first starring role after having been in already eighteen other films, but mostly in small roles.

The real star in this film is the majestic and powerful Niagara Falls and the costar is the bell tower, where musical requests by the visitors are honored. The falls symbolizes that the Loomis’ sexual conflict is getting out of control and leading to their destruction. Director Hathaway does a nice job of crafting the film and of exploiting its colorful location, but what he doesn’t do that well is allow the mystery part of the story to gracefully unfold. The last reel plays like an action film featuring a strangulation, a kidnapping, a helicopter rescue, and one character doomed to be going over the falls.

In contrast the Cutlers are seen as a conventional couple. The camera seems to be gently eyeballing them and showing that their sex life is calmer and more suited for a loving relationship than the Loomis’. Yet the normal couple is attracted to the more exotic one; especially Polly, and it is through her eyes the film is filtered out to us. 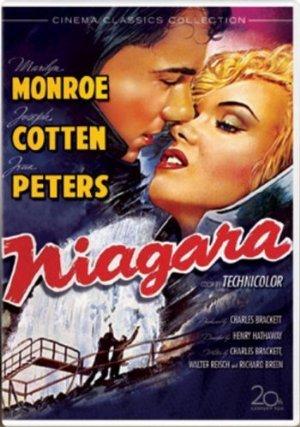 PRINCE AND THE SHOWGIRL, THE

WHERE THE TRUTH LIES