Martin Scorsese (“Raging Bull”/”Taxi Driver”/”Goodfellas”) helms this overlooked unconventional musical romantic/drama, modeled on Ida Lupino’s The Man I Love (1946), as his valentine to Hollywood and the Big Band era (the sounds of such Scorsese favorite’s as Benny Goodman, Tommy Dorsey, and Artie Shaw). So far, it’s the only musical Scorsese attempted. It energetically and accurately re-creates the kind of staged artificial film that the studios would have shot in the 1940s (it was shot entirely on the studio back lots at MGM). Far from one of Scorsese’s best, it nevertheless packs a wallop in the tempestuous relationship between Liza Minnelli and Robert De Niro, comes with a top-notch score (Liza elegantly sings the title song, the one Sinatra later made his own) and though choppy and overlong has merit overall as an unsentimental look back at a lost era.

Irresponsible, bossy, annoyingly cocky and temperamental saxophonist Jimmy Doyle (Robert De Niro) on V-J Day tosses his army uniform out the window and dons a Hawaiian shirt as he bounces around the dives in New York trying to get an audition and score a chick. The emboldened sax player (De Niro’s sax is played by the great Georgie Auld, who also plays the bandleader Frankie Harte) meets and is rejected by a USO singer, Francine Evans (Liza Minelli), but persists to woo her again when his pal fixes him up with the lounge singer on a blind date and she somehow now falls for him (go figure dames!). After going on tour together with Frankie Harte’s band the two impulsive struggling performers get married in the middle of the night by a justice of the peace. Their stormy marriage and the birth of a baby proves too much for their fragile marriage and they split. Years later both become successful and the door’s left open for a reunion, but something happens whereby they can’t communicate what they really want and this opportunity is missed.

The lavish film went over budget and was drastically cut from its original four and half hour length to 130 minutes; it lost money for United Artist, as audiences stayed away to see Star Wars and Saturday Night Fever. To Scorsese’s chagrin the studio also cut one of the brilliant concluding musical sequence entitled “Happy Endings.” The film was re-released in 1981 and thankfully the “Happy Endings” sequence was restored, as well as 30 minutes added to its cut version of 130 minutes. It has since been rehabilitated and gained many new converts, some among those who originally ripped into it as a failure. It’s no failure, but the unsympathetic character played by De Niro, all the nasty domestic spats and no great theme developed, put a damper on it. Nevertheless, there are some things about it that rub me the right way: it has style, fire in its belly, great visuals and was ahead of its time.

Lionel Stander, who appeared with Judy Garland in A Star is Born, here plays the agent of Garland’s daughter Liza Minelli. 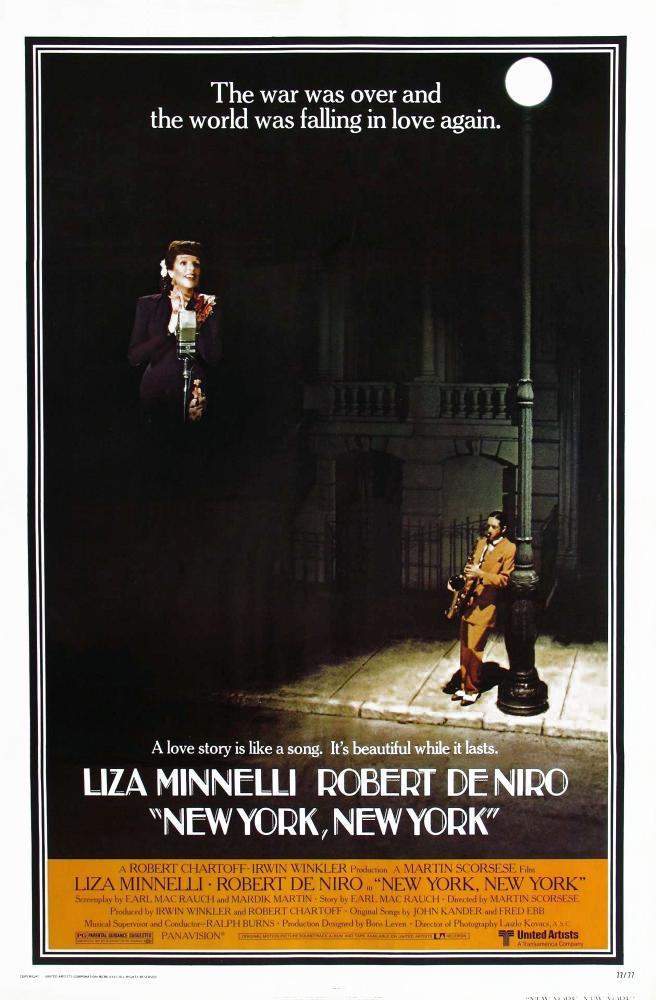