An old-fashioned provocative drama set in Australia. It tells of Catholic brothers, Len and Frank Maguire (Bill Hunter & Gerard Kennedy), who start out working together for Cinetone making newsreels, but the more ambitious and brasher brother Frank leaves for their American-owned rival Newsco, getting a transfer to Los Angeles.

The film covers some of the important events in the post-war Australia between 1949 and 1956, before television became popular and when a news hungry people went to the movies to get the news they couldn’t always read about in the newspapers (sometimes with a more comical twist). Director Phillip Noyce (“Rabbit-Proof Fence”/ “Heatwave”/ “Dead Calm”) mixes together a soap opera story around the real-life newsreels that include demonstrations against Communists, the Red Scare sweeping the country, the tragic flood in Maitland and the 1956 Olympics in Melbourne (showing archival footage of the bloody water polo match between Russia and Hungary after the Russian invasion.

The set-pieces of the authentic newsreels are fantastic. They enabled this film to be well received at film festivals and by the Australian Film Institute during award time. It shows Len on the job as a cameraman dealing with events, his embittered wife Fay (Angela Punch) who will divorce him over Catholic principles after raising a large family, Len’s relationship with his company’s attractive executive Amy Mackenzie (Wendy Hughes)—the former girlfriend of Frank’s, Len’s friendly assistant Chris Hewitt (Chris Haywood) and his tragic death covering the flood, the principled voice-over man (John Dease) and Cinetone’s disciplinarian, the professional general manager boss A.G. Marwood (Don Crosby).

The way the newsreels are woven into the fictionalized story is seamless. It takes us up to a time when television was still primitive, but would soon emerge as the medium that all but put the last nail into the newsreels.

Hunter gives a superb performance as the guy with the old-fashioned values who wouldn’t sell out his integrity, and will voice his political feelings openly by telling everyone that he will not vote to ban the Communist Party of Australia despite it angering his devout Catholic wife and going against the wishes of his church. It tells of a bygone era in a humorous and intelligent way, and is a good example of a straight-forward weighty film that they just don’t seem to make any more these days. 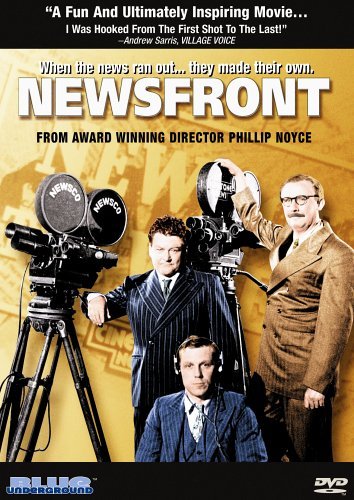 LAW OF THE JUNGLE