NEWS OF THE WORLD

“Hanks is at his paternal best, here.”

The former journalist from Britain, Paul Greengrass (“Jason Bourne”/”Captain Phillips”), directs Tom Hanks in his first Western. The story was built around a parable for these dark times of helping those in need. It reminds you of both classic John Wayne films–“The Searchers” and “True Grit.” All these films involve the stars trying to bring a young girl faced with tragedy home. In the Hanks film, the hero is a decent guy, while Wayne is his usual macho self.

The slow-paced laconic Western is based on the 2016 novel by Paulette Jiles, and is meticulously written by Greengrass and Luke Davis.

The grey bearded and weathered looking 60ish Captain Jefferson Kyle Kidd (Tom Hanks) is a widowed Confederate veteran of the Civil War, traveling alone on the North Texas frontier (on the route between Wichita Falls and Dallas) in around 1870. He thinks it’s best that people keep informed about the world and that he’s proud that after his wife’s death during the war the lonely man goes from being a printer to earning a living helping the public get informed by the news he delivers (no talk here between fake and real news). Being in the media gets the old soldier a dime a head in rural towns, as he draws a crowd to gather near him as he recites stories taken from various sources — such as from newspapers like The Dallas Herald and the New York Times. Kidd reads to his clientele news that ranges from Reconstruction policies to miners’ strikes. It’s a time when the public didn’t take 24/7 news coverage for granted and his presence was welcomed whether he brought good news or bad.

Hanks is at his paternal best, here. Earlier on he found on the trail an empty cart driven by a former black slave now a Federal soldier, whom he finds lynched to a tree nearby with a sign on him saying “Texas Says No! This is White Man’s Country.” There’s also a wrecked wagon train nearby where the wild-eyed 10-year-old Johanna (Helena Zengel, who steals every scene in the film) was hiding. She’s a blonde German girl whose parents were slaughtered after she was kidnapped by the Kiowa and was just rescued by Federal troops, who killed the Indians and told the black man to drive her to her nearest relatives. No troops are present but there are orders in the wagon to take Johanna 400 miles to her aunt (Winsome Brown) and uncle (Neal Sandilands) in Castroville. The traumatized Johanna, held by the Indians for a few years, hardly speaks, doesn’t remember much English or how to behave as a young lady, and is not interested in traveling for days to meet her stranger relatives. In fact, she would still rather be with the Indians. But she’s in good hands with Hanks, who can’t palm the kid off to passing Federal troops or to a friendly couple he knows in Red River who are storeowners (Ray McKinnon and Mare Winningham).

It turns into a road film, as Kidd is determined to get the unhappy girl to her relatives whether she wants to go there or not. In the process, he’s determined not to get either of them killed on the perilous trip (in the background the Indians are conducting revenge raids on the whites and the whites are killing the Indians to get their land). Whether they will or not get there safely raises the tension level, as they predictably begin to bond (the film breaks no new ground, so the tension never rises because the film couldn’t be more predictable).

On the road, Capt. Kidd confronts a bad guy named Almay (Michael Angelo Covino) who wants to “buy” Johanna so he can use her as a prostitute. This leads to a mountain chase (the film’s best scene) whereby the Captain has to deal with both the bandit and his gang.

When the child’s protector and the child move on past Dallas after fleeing some bandits in town (like the gang leader Thomas Francis Murphy), the journey becomes a slow and arduous one (like the film), as the road is fraught with danger and it’s difficult to have a conversation in English with someone who doesn’t speak English. The child gets over by acting defiant and oblivious to what’s happening to her.

What excites us about Kidd is his shrewdness, decency and ability to survive despite not being a gunfighter like most Western heroes depicted.

There should have been more action scenes to keep things more lively, but since in modern times there are so few good Westerns made (and this was well-made), I can recommend it even if the rugged Duke, regrettably long gone,  would have been better suited for this role than the genteel Hanks who always performs well but is in a picture more suited for the Duke.

It was filmed in New Mexico, on a visually great location setting. 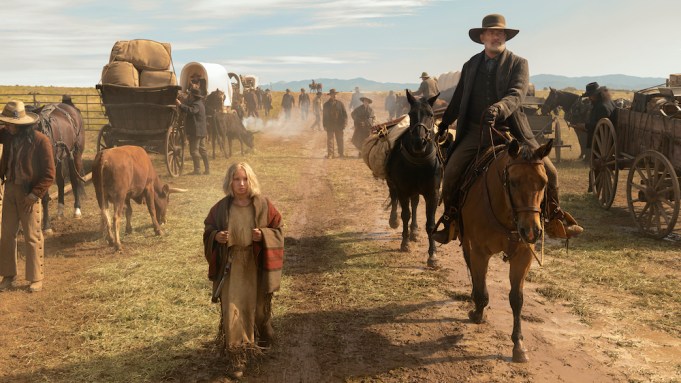