“Mercouri’s energetic performance took it to greater heights than it deserved.”

American expatriate Jules Dassin (“Rififi,”/”Topkapi”/”Brute Force”) while living in Europe directs, produces and costars in this off-beat romantic comedy. He was blacklisted for his liberal beliefs without ever having testified–he was named in 1952 a communist by fellow blacklisted and imprisoned director Edward Dmytryk and chose exile. Dassin fell in love with Melina Mercouri, whom he cast in He Who Must Die (1957), and made this film about a self-satisfied happy Greek hooker as a vehicle for her to show off her stuff. The hit comedy romance resulted in her international stardom and their marriage. The film is mostly in English with some Greek. It won for Greek composer Manos Hadjidakis an Oscar for Best Song for the title song. Filled with local color as seen through an American tourist’s eyes, with lively music especially from the local traditional instrument of the bouzouki, the naughty themed film captured the public’s imagination over modern Greece (which turned out good for the tourist industry). Though lively and viewer friendly, it’s only a shoddy pedestrian variation on Pygmalion. To its credit, it’s lighthearted and spreads good cheer–not always an easy thing to do. Dassin managed to subtly get in America’s inclination for forcing its values on other countries with no regard for their native cultures, which gave the film its needed political spark.

Mercouri’s energetic performance took it to greater heights than it deserved. She won Best Actress honors at the Cannes Film Festival. Despite being condemned by the Catholic Church’s Legion of Decency for its positive view on prostitution, the low budget, black and white shot film made for a mere $125,000 made millions. Perhaps back then the film seemed more relevant than when viewed today, for it now seems too tame for all the controversy it caused during the Academy Awards for receiving five Oscar nominations for what critics of it said was such a questionable subject matter and they also resented that a foreign made film received so much attention over the Hollywood films.

The curious title comes from the practice of our heroine prostitute to not work on Sunday but instead hold an open house for the men she likes the most.

Ilya (Melina Mercouri) is the happy-go-lucky headstrong prostitute in the Athens port city of Piraeus, who lives on a boat and has a wide circle of men friends who adore her just the way she is. Homer (Jules Dassin) is the nerdy Greek scholar American tourist, an amateur philosopher, who came here to walk on the same sacred ground as the philosophers Aristotle, Plato and Socrates. Ilya’s clients gladly share her services and show no enmity to each other, but Homer, though earnest, comes with an agenda to reform her morals and introduce her to Greek culture the correct way, so that she doesn’t tack on happy endings to the tragedies. With him happiness is like it is for the ancient Greeks, a matter of mind over sensual things.

So as Homer plays Henry Higgins, Ilya is willing to give it a go and gives up her prostitution to hit the heavy Greek books for two weeks. The convoluted story goes on to reach a less than satisfying conclusion, in a messy film that has something in it to both please and disengage most viewers. Later on the film left a sour taste in the mind of the more serious Greek filmmakers, who complained that the stereotype of the happy, earthy Greek peasant presented here was what the public demanded they give them from now on. I see it as middle-brow artsy fare for the arthouse crowd who can easily cheer over hedonism beating out intellectualism because of the simpleminded way the battle was presented. 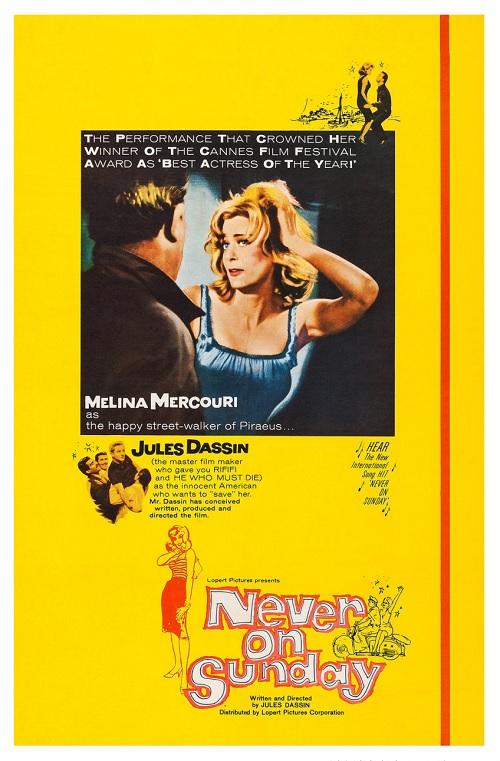