NEVER GIVE A SUCKER AN EVEN BREAK

It’s made in the nutty tradition of the Marx Brothers nonsensical madcap comedies; even Margaret Dumont puts in an appearance doing her usual part of the comic’s foil. There’s no coherent plot, few choice quips, no continuity to the narrative and sight gags that are more ridiculous than funny. It’s one of W.C. Field’s (“The Bank Dick”) weaker works but is so refreshingly bizarre and anarchistic that it’s winsome anyway, with the comedian sparing no one but his child co-star Gloria Jean (Universal was grooming her for success at the time, and she got equal star billing) from his trademark insults and precious double-takes. It came at a time when there were new stars that the studios were pushing (e.g, Bob Hope at Paramount, Red Skelton at MGM, & Abbott and Costello at Universal) and Fields was no longer the top dog but being shown the door by the studio suits. Fields wrote the script (under the absurd pseudonym of Otis Criblecoblis) fully aware he was mocking the movie industry, the hand that fed him all these years. This was his last starring role, though he appeared in four other films in cameo roles.

Fields plays himself. He has an office meeting with the Hollywood producer/head of Esoteric Studios, Franklin Pangborn, to pitch his story idea, though the producer yearns to make a conventional musical film with Fields’ teen-aged soprano niece Gloria Jean playing the lead. Fields opts for the ridiculous plot where he travels with his niece by airplane to Mexico to visit a Russian Village, with the plane looking more like a train with sleeping berths. His plan is to become a millionaire by selling wooden nutmegs to members of that Russian colony. Not able to comprehend the irrational screenplay from Fields’ reading, Pangborn takes over that chore. He’s perplexed that anyone would be stupid enough to believe that Fields can jump out of a plane and go on a free-fall to save his bottle of golden nectar (booze) that accidentally fell off and land without a scratch on the bed of a mountaintop compound residence. There he meets a Russian exile woman (Susan Miller) who never saw or met a man before. He then engages her to play “squidgulum,” a version of the kissing game “post office,” but flees the residence by lowering a basket dumb-waiter down the mountain when her man-hating mother Mrs. Hemoglobin (Margaret Dumont) also wants to play. After hearing some more incredible exploits of Fields returning to the mountaintop to marry Mrs. Hemoglobin when he learns how wealthy she is, the producer has enough of the screenplay and throws Fields out telling him he never wants to see him again.

There are some memorable sketches for the faithful followers of the Great Man who stay with this surreal and disjointed screenplay, such as the restaurant-ordering scene and the classic slapstick car-chase finale (lifted for Abbott & Costello’s 1944 “In Society”).

The film’s best one-liner has Gloria Jean ask Uncle Bill “Why didn’t you ever marry?” Fields: “I was in love with a beautiful blonde once, dear. She drove me to drink. That’s the one thing I’m indebted to her for.” 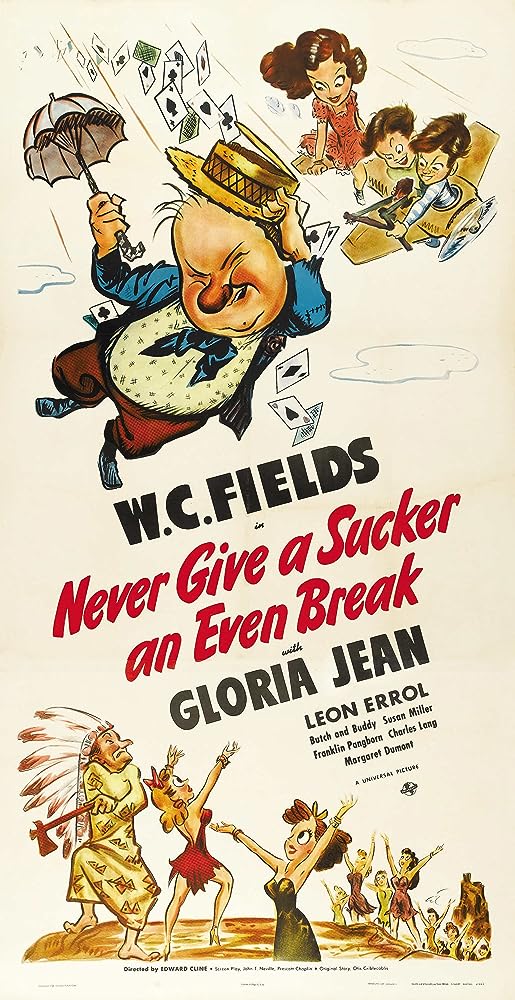