“If I had to choose a Holocaust film that was most compelling, this one would rate near the top of my list.”

The Nazi Officer’s Wife is an amazing Holocaust survivor documentary. A Jewess escapes from the Nazis by disguising herself with an Aryan identity and has the nerve to live during the early war years in Munich, the birthplace of Nazism. If that weren’t enough of a challenge the heroine, whose memoir this film is based on, ends up ironically married to a Nazi official who is an anti-Semite (at least in the sense he believes the Germans are superior and deserve to be the master race). Even after she spills her secret, he insists on the marriage. To make matters even more absurd, he’s drafted and becomes a Nazi officer during the last days of the war. The truth is often stranger than fiction, and that certainly applies here.

If I had to choose a Holocaust film that was most compelling, this one would rate near the top of my list. What makes it special is its unusual personal story and ability to bring home to the viewer the dread going through the victim at the time of the Nazi regime, as she’s faced with making tough life or death choices. The power of Edith Hahn Beer’s engrossing story is furthered by mixing in well placed interviews with the forthright but still at times shaken Austrian survivor, and by getting interviews with a few of her Jewish and non-Jewish childhood friends to give some other view points. Also, the showing of well preserved newsreels of the time, in addition to Edith’s personal photos and reading her letters that made clear the threatening circumstances she faced. It’s topped off by a candid interview with her bitter but reluctantly forgiving daughter Maria Angela, who was raised Jewish and did not find out until 1974 the truth about her origins or that she was baptized as a means to please her Nazi father. She might have been the only Jewish child born in 1944 in a Nazi hospital.

It’s directed and co-produced by 1998 Academy-Award nominated Liz Garbus (“The Farm: Angola,USA“). Just when you might think the Holocaust story has been fully told here comes this haunting portrayal of a woman-in-peril, who survives by joining the enemy through marriage. After seeing so many Holocaust films the tragedy seemingly loses power with each telling, but I was surprised to still feel shocked by Edith’s story. It speaks volumes for the artful way Ms. Garbus crafted the documentary and how powerful such a story is when there’s a human face to go along with it. It is also helped by the moving narration of Susan Sarandon that seamlessly blends in with Edith’s story told in chronological order.

Edith Hahn was born in 1914 in Vienna, and came from a family of assimilated Jews who were loyal to their country. Her father was a war veteran of WW1. In her twenties, she was curious about philosophy, literature, and history, and the bright student attended law school hoping for a career in the justice system when the Nazis suddenly took over Austria and forced all the Jews into the ghetto. The country she had known as merely harboring prejudice against Jews took readily to the Nazis and instantly started attacking Jews in earnest and it culminated in the historical Kristallnacht, where Jewish shops and homes were destroyed and the crowds eagerly took everything away from the Jews in an organized looting. Edith had no choice but to go with her widowed mother to the ghetto, but was separated when forced to go to North Germany for 13 months to a slave labor camp. She convinced the Nazi authorities to spare her mother, and left her behind in Vienna. When Edith returned her mother already was deported to the death camps in Poland, and that was the last she heard from her. Expecting help from her intellectual half Jewish boyfriend Pepi whom she loved very much, she was disappointed when he was too afraid to join her after she refused to register as a Jew and shed the Yellow Star from her dress. This fugitive act caused her to go underground where she became a U-boat, that is someone on-the-run blending invisibly into the crowds. It was a time of great confusion and terror for the 28-year-old, who had no more family or friends to turn to. Out of desperation, after hiding in the parks and struggling to get food, she turned for help in 1942 to a woman Nazi official a girlfriend had given her as a possible source of help. She was sent to another unknown male Nazi official who advised her how to change identities. She got a non-Jewish friend, Krystal Margarethe Denner, to tell the authorities she lost her ID papers in a boating accident and was issued duplicates, as Edith kept the original papers and became Margarethe. She had to now leave Austria because there couldn’t be two people with the same name. Edith after a miserable train ride wracked with uncertainty found work in Munich as a Red Cross nurse’s aide, as she kept her secret and tried not to get too friendly with the Germans and avoided dating the same Nazi soldier twice. The most striking part of the film is about how she met the domineering Nazi party official Werner Vetter when he visited a Munich art gallery and months later they lived as an unmarried couple in the industrial East German city of Brandenburg. They later married upon his need for respectability, as she became a respected middle-class housewife of a factory supervisor in an essential wartime industry.

Edith’s 250 letters to Pepi were saved by him at great risk and some are read in a meaningful way by Julia Ormond, as they convincingly give one the tortured state of Edith’s mind. If that wasn’t heartbreaking enough, there’s also the footage of Hitler and the adoring Germans and Austrians saluting their dearest Führer or the painful glimpses of the ghetto roundups. Juxtaposing Edith’s story with the footage of the Nazis she lived among had a powerful visual effect and showed just what a mess she was stuck in.

Edith is a complex woman, who was torn by these experiences and troubled by the deep scars it left in her psyche. She survived to tell the same civil servant registrar, whom she first had to convince she was an Aryan, after the war that she lied and was really Jewish. She took pleasure in becoming a justice in the Russian-controlled Brandenburg, as the Russians looked to appoint those without a Nazi past to help rebuild the country. Upon her husband’s return two years after the war from a Russian prison camp, he couldn’t handle the new independent Edith and divorced her over her protests. She eventually couldn’t handle living in the Russian sector and fled to London.

The film captures so much of the inner battles Edith’s still fighting from those tragic days, as her guilt and who she really is are questions that still linger in ways that are not that easy to answer. Edith, now an elderly lady living in Israel, admits her survival had a lot to do with luck and meeting courageous people (some Nazis), who took chances helping her for whatever reasons. The human condition is a strange one, and the strange things human beings are capable of doing to each other and its far-reaching effects are well covered in this startling feature. Edith was further hurt when the other Holocaust survivors immediately after the war couldn’t accept how she survived and treated her with hostility. The Nazi Officer’s Wife is mostly about trying to fathom the long term psychological effects of surviving the Holocaust and asking what is the price one must pay for survival. Because Edith had to change her identity, it is still undetermined who she really is (at least the film never cleared it up). If there’s any fault to the documentary, it is that we were left in the air about her later life and are not given enough clues to really know how she’s managing. Though I realize it is difficult to know for sure the lingering psychological effects of surviving such an ordeal, I still would have liked to know a little bit more about what Edith’s now doing as I got the impression she still hasn’t come to terms with her past. 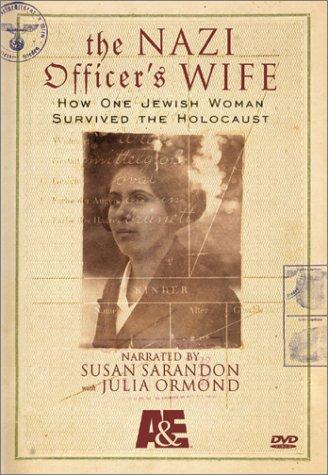