Mani Ratnam (“Guru”/”Waves”/”Bombay”) is writer-director of this less than compelling Bollywood crime drama, that comes with a sharp moral twist, colorful location shots and plenty of bouncy modern pop songs of India. Its message is that people are made into criminals and not born that way. The filmmaker might be sure of that, but I’m not convinced that’s a certainty (I’ve seen too many criminals with no motives or reasons to go bad, who nevertheless committed horrible crimes). In this outrageous award-winning pic, the police are viewed as the bad dudes while the crime kingpin is viewed as the good dude–forced into a life of crime by police brutality, but never forgetting his roots to help the needy.

In Tamilnadu a father is killed by the police for being a union leader and his young son retaliates by killing the police officer responsible. He then flees to Bombay (Mumbai) and lives as a street person, until adopted by a kind-hearted smuggler named Baba. The kid grows up assisting his second father as a smuggler. His job was to unload the smuggled articles from his boat, out in the ocean, and deliver them to the shore to crooked gangsters for a fee. But his second father, who generously gives all his extra money to help the neighborhood poor, is brutally hanged when arrested by the police. The now grown boy, Nayakan (Kamal Hassan), retaliates by brutally killing with a sledgehammer the inspector responsible for executing his beloved second father. Instantly becoming the hero protector of his poor Bombay neighborhood, he becomes known as The Godfather, Velu Nayakan, and becomes wealthy as a top-line smuggler while never forgetting to be generous and helpful to the poor (India’s answer to the mafia, he even gives money to the mentally-disturbed son of the cop he killed). Nayakan soon finds happiness marrying a young prostitute from a brothel, Neela (Saranya). She gives him a son and a daughter. But the bliss doesn’t last long, as rival gangsters retaliate against him by killing his wife and son. His daughter Charu, when grown, revolts against her dad’s criminal occupation and goes to another place to live. There she marries a police officer, who doesn’t know she’s the daughter of the notorious Velu Nayakan he’s hunting down. This contrivance leads to a surprise violent ending, that was just as unconvincing as the rest of the pic.

The film is based on the real-life don, Varadarajan Mudaliar. 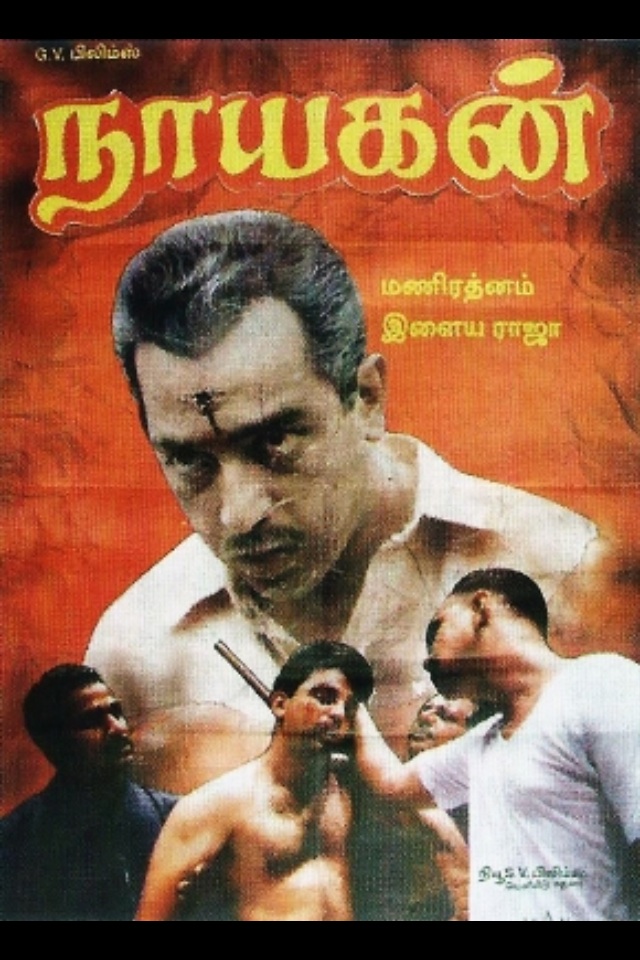