The intense and graphic documentary by Bill Guttentag and Dan Sturmann, who co-wrote it with Elizabeth Bentley, is inspired by Iris Chang’s novel The Rape of Nanking. Nanking, which in 1937 was the capital of China, suffered from the severe atrocities committed by the Imperial Japanese Army that invaded Shanghai in August and by December of that same year had defeated the Chinese army and sacked the fallen city of Nanking. This is still a neglected and disputed part of world history and a lingering sore subject between the two countries, as the gruesome details show the slaughter of over 200,000 Chinese citizens and the rape of untold thousands of women, girls and occasionally boys. It’s a heart-wrenching study on how cruel humanity can be, and this bleak film bears witness to that tragedy and adds its voice to what really happened despite Japan’s continual denials.

It includes never before seen archival footage that was secretly shot and smuggled out. It also shows how some 22 American and European doctors, missionaries and teachers in Nanking, along with a German businessman and Nazi sympathizer, John Rabe (Jurgen Prochnow), who foolishly believed the Nazis weren’t capable of such cruelty and that Hitler would never allow it if only he knew, worked together to protect the Chinese (largely those too poor to evacuate) from the brutality of the Japanese military by setting up a “safety zone” for the Chinese in the missionary, the missionary hospital, Rabe’s home and Ginling College. It should be noted that the “safety zone” was never officially recognized by the Japanese military, yet it was honored and the valiant effort saved an estimated 250,000 lives. While on a soundstage actors including John Getz, Mariel Hemingway, Woody Harrelson and Stephen Dorff read from their source materials what their characters they portray did during this horrible period in Nanking.

The documentary is an effective and moving account of civilization gone amok, and is an important historical record that needs to be seen to be believed at how desperate the situation was in Nanking. It also needs to be seen as a warning to future generations. It was financed in large part by AOL co-chairman millionaire Ted Leonsis. 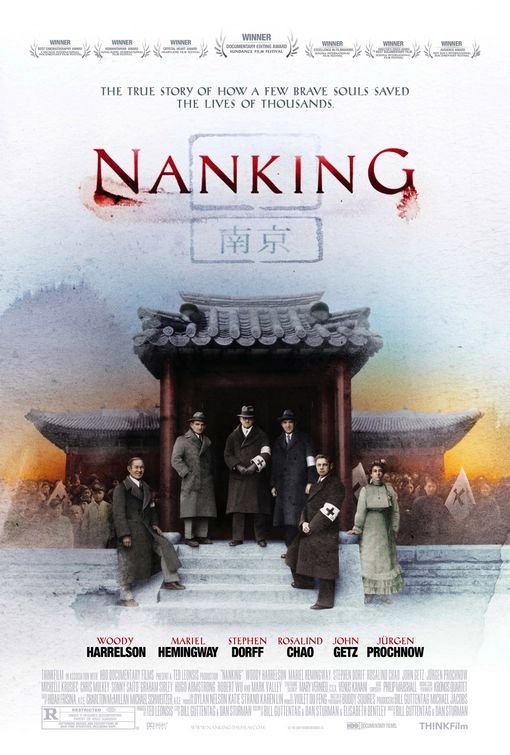