The Nancy Drew series was the creation of Edward Stratemeyer, owner of the Stratemeyer Syndicate, who had already created such popular series as the Bobbsey Twins, Tom Swift, and the Hardy Boys. Nancy served a need for a girls’ mystery-adventure series, and Stratemeyer hired a young journalist to write the stories based on plot outlines that he provided her. The first book, The Secret of the Old Clock by ‘Carolyn Keene,’ was published in 1930 — the same year that Stratemeyer died. Mildred Wirt was another young journalist who wrote most of the first two-dozen books in the series. Stratemeyer’s daughter, Harriet Stratemeyer Adams, supervised them, and later wrote many of the books herself. The author’s pseudonym, however, would always remain “Carolyn Keene. The four films of the series, produced by Warner Bros., didn’t come about until 1938. This film was the second feature.

William Clemens (“Calling Philo Vance”) does a good job directing in a fast pace and writer Kenneth Gamet flushes the tale out with life. The feisty Bonita Granville makes for an appealing Nancy Drew, who loves to be a sleuth, an unapologetic busybody and offers heaps of small town charm.

In Nancy Drew’s small town of River Heights, somewhere in the Midwest, the local newspaper holds a contest for high school students whereby they are invited to submit a news story and the best story wins a medal and $50 as judged by the crusty Tribune city editor (Thomas Jackson). When a real reporter fails to show for a developing murder story, Nancy secretly takes his assignment in place of her trivial story. At the inquest, Nancy learns that the death of the wealthy Kate Lambert was due to being poisoned by a chemical used in photography. The suspicion falls on Eula Denning (Betty Amann), a ward of Ms. Lambert, who ordered the chemicals and who will be sole heir to her estate. Nancy intuitively believes Eula is innocent, and knows her only defense is that the fingerprints on the missing tin of poison do not match hers. The problem is the tin can is missing.

Nancy elicits the help of her tennis playing boyfriend Ted Nickerson (Frank M. Thomas, Jr.) and gets the unwanted help from the trouble-making prankster-minded youngsters Killer Parkins (Dickie Jones) and Ted’s little sister Mary (Mary Lee), in searching for the vital piece of evidence. In her sleuthing Nancy runs into a dangerous prizefighter with a cauliflower ear (Jack Perry), his thieving babe (Sheila Bromley), and the closest relative to Ms. Lambert, the poisoner himself, Miles Lambert (Larry Williams). He was left out of the will and stands to be the next in line for the inheritance if he can remove Eula. Nancy’s prominent lawyer father Carson (John Litel) is induced by his nagging daughter to take Eula’s case, and in the finale Sergeant Entwhistle (Olin Howland) is called on for help in trapping Miles.

I got a big kick out of this little detective story. It crams a lot in an hour, as it includes a goofy scene in a Chinese restaurant, a thrilling car chase over a fender-bender hit-and-run and Ted roped into a mismatched boxing match with Soxie. 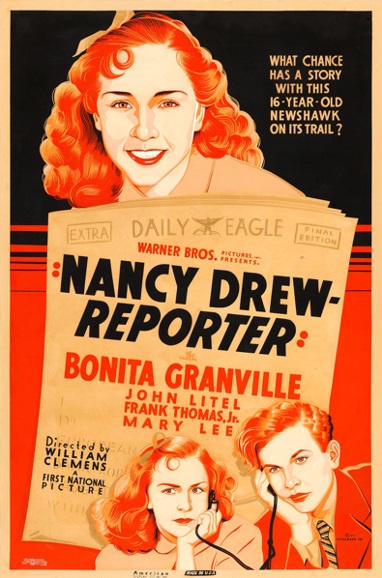