One of those oddball films that’s neither fish nor fowl. It’s an experimental grainy black-and-white low-budget Thai film, shot in 16-millimeter and then blown up to 35-millimeter, that’s part roadside nonfiction documentary and part fiction, that exploits form over matter. By using interviews of various disenfranchised lower-class nonprofessional actors of all ages in the hinterlands, the filmmaker tries to keep a story going through one’s impromptu imagination. Its appeal might mainly be to those who have sickened of the usual formulaic mainstream fare and are willing to reach out for any port in a storm.

It opens inside a car going south of Bangkok; the radio is airing a sappy commercial for its soap opera program, that has the announcer state: “The more he tries to get her back, the more complicated the story becomes.” The driver eventually stops in the Bangkok outskirts to chat with a middle-aged lady vegetable vendor hawking her stuff from the back of her pick-up truck. She tells the driver a story about her father that is primed to be a real tearjerker. Her dad and mom visited their uncle and aunt in the country when she was an infant, and because dad didn’t like the way they cooked their rice here he wanted to split but was short of bus fare to get home. His uncle suggested if he sold him his infant daughter, he would cough up the money. To her surprise, her father accepted and she never saw her folks again. After finishing her tale of woe, the off-camera director asks: ”Now, do you have any other stories to tell us? It can be real or fiction.” She then lays on him a story that might be of folklore origin about a caring tutor named Dogfahr whose sole student is a crippled boy who leads a sheltered life. With this promising start of a story, the director travels the countryside building on it through random interviews with the local villagers. It gets its title when a passerby gives the story a sci-fi twist by adding an alien into the mix. From thereon it spins out of control with tales from among others a community theatrical ensemble, kickboxers and two female teenage deaf-mutes telling their story in sign language; it ends in the hands of some giddy and boisterous schoolchildren, who add on that Dogfahr was eaten by a witch-tiger and that the bad alien child battled the good alien child who possessed a magic sword; in the end the good alien wins and the witch-tiger retreats into the woods. The story might have ended here but the camera keeps rolling for another ten minutes, as it shows some kids messing around in the schoolyard and by a river bank.

Though entertaining, unusual and intriguing, it becomes hard pressed to come up with any significant meaning except that it’s possibly autobiographical or mired in symbolic traditional folklore. Indie Thai director Apichatpong Weerasethakul (“Tropical Malady”) tells us in the liner notes he used the “Surrealist storytelling technique known as Exquisite Corpse, wherein a variety of writers would contribute to an ongoing story one sentence at a time, largely oblivious to what came before.” In any case, it’s wonderfully different from any American film and might appeal to those who like mysteries–even ones where it only seems a dog is trying to outrun a tin can (its mysterious object). 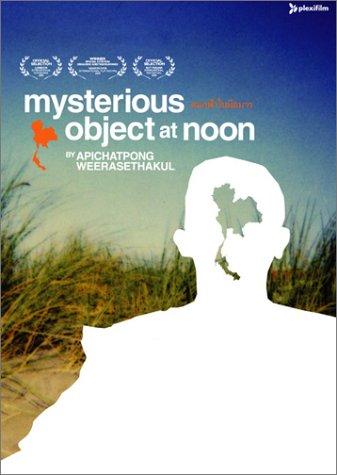