MY SON THE VAMPIRE (aka: VAMPIRE OVER LONDON) (aka: MOTHER RILEY MEETS THE VAMPIRE)

This one takes the cake for bad vampire satires. It cries out for The Three Stooges or the Ritz Brothers but instead gets an overbearing Arthur Lucan in drag as Mother Riley. He’s a British drag comedian who played Old Mother Riley in an unappealing series of lowbrow comedies. Bela Lugosi, at the end of the road in his movie career, gets to play the vampire in a role that prepares him for a future one in a Ed Wood Jr. film that cemented his downfall. B film Brit director John Gilling (“The Reptile”/”The Mummy’s Shroud”/”Blood Beast from Outer Space”) keeps things noisy, busy, intemperate and unrestrained, qualities that don’t bode well for this mess of a film. It’s a musical/comedy that never manages to be funny, not even one yuk. During the opening credits we get to hear Allan Sherman’s novelty song about a vampire.

It’s set in London during a crime wave where five women have disappeared, believed to be taken by a Central European mad scientist named Von Housen (Bela Lugosi). He fakes being a vampire to coverup his crimes. The last one snatched is Julia Loretti, the daughter of a famous Italian scientist. Von Housen brings her to his mansion and his henchmen extract from her where she hid the chart her dad gave her that tells where he stored uranium needed for his experiments. The mad scientist has created WMD to destroy the world and one robot to be his slave, but needs the uranium to create 50,000 robots. Don’t ask why the uranium or why that number of robots, ask only what was going through Val Valentine’s mind when he wrote this story and screenplay.

When the manufactured robot, named Mark 1, evidently outsourced, is delivered in a crate mistakenly to harried Irish grocery store owner Mother Riley (Arthur Lucan), Von Housen orders the robot to kidnap her and take her to his mansion. Upon delivery Riley is made a light duty char woman and fed steak and liver, but her happiness at her new job quickly diminishes as she notices that the charming scientist is the serial vampire killer and is torturing Julia in his laboratory. Since the cops won’t believe her, it’s up to Mother Riley to save the day by her lonesome.

If I was stuck on an island and had a choice of watching either this movie or Plan 9 From Other Space, I would never choose this one. I’ll leave the questionable silly humor of this one for some of my Brit friends, who might have acquired a taste for such nonsense by just being Brits. 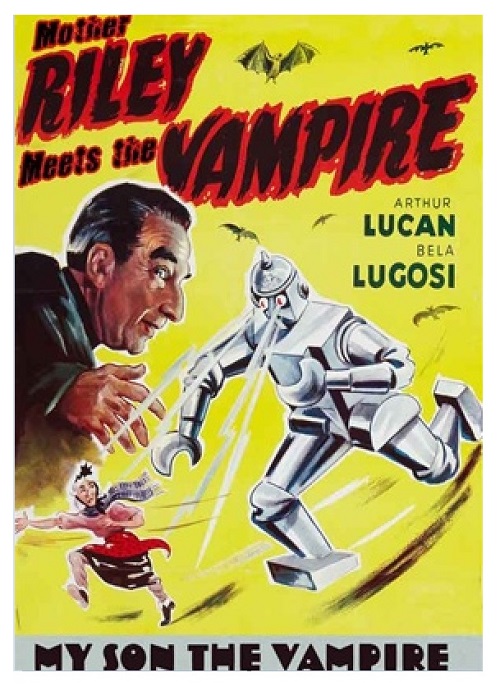