Released in 3-D and set in Samoa (filmed in Hawaii), Miss Sadie Thompson is a watered-down adaptation of Somerset Maugham’s Rain. It was originally a stage play (starring the legendary Jeanne Eagels) and filmed three times before with such noted actresses as Gloria Swanson and Joan Crawford. Raoul Walsh’s silent being the best and this Curtis Bernhardt (“Possessed”/”Conflict”/”Devotion”) being the least effective. The screenplay by Harry Kleiner keeps things pointless and uninspiring. This semi-musical is mainly a star vehicle for Rita Hayworth, who plays the good-time unapologetic girl with relish but the story is stale. Rita does a good job singing “The Heat Is On.” But in two other songs she performs, “Blue Pacific Blues” and “Hear No Evil, See No Evil,” her vocals are dubbed by Jo Ann Greer.

Sadie Thompson (Rita Hayworth) is a happy-go-lucky San Francisco woman wanted on a morals charge there and forced to flee her singing gig in a Honolulu bordello over an incident involving a brawl. She’s on her way to take a nightclub singing job in New Caledonia, but gets stuck for a week on a remote South Pacific island with a marine garrison when the ship to take her there gets quarantined. There she’s overwhelmed with love by the overbearing pit bull marine Sergeant Phil O’Hara (Aldo Ray) and with hate by Alfred Davidson (Jose Ferrer). He’s a visiting missionary layman, chairman of a missions board, who is an intolerant religious bigot trying to reform Sadie with his false pious platitudes after becoming disgusted that she’s the only white woman who stays up late singing bawdy songs with a barroom full of ogling marines. Davidson shows his true colors when he rapes Sadie while pretending to help her and then kills himself. In the meantime, O’Hara learns a lesson in tolerance, as his love for Sadie overcomes his doubts over her shady past. As for Sadie, she learns that she can’t keep running away from herself and finds redemption in the sergeant’s marriage proposal. It’s reduced to being more like a Doris Day flick than one that should bother the Hays censors.

By de-glamorizing her character, Rita plays her with oomph rather than as a bad woman. During filming, the Love Goddess met singer Dick Haymes and married him; the marriage only lasted two years, but she didn’t work on another film until Pal Joey some four years later and she never regained her acting chops. 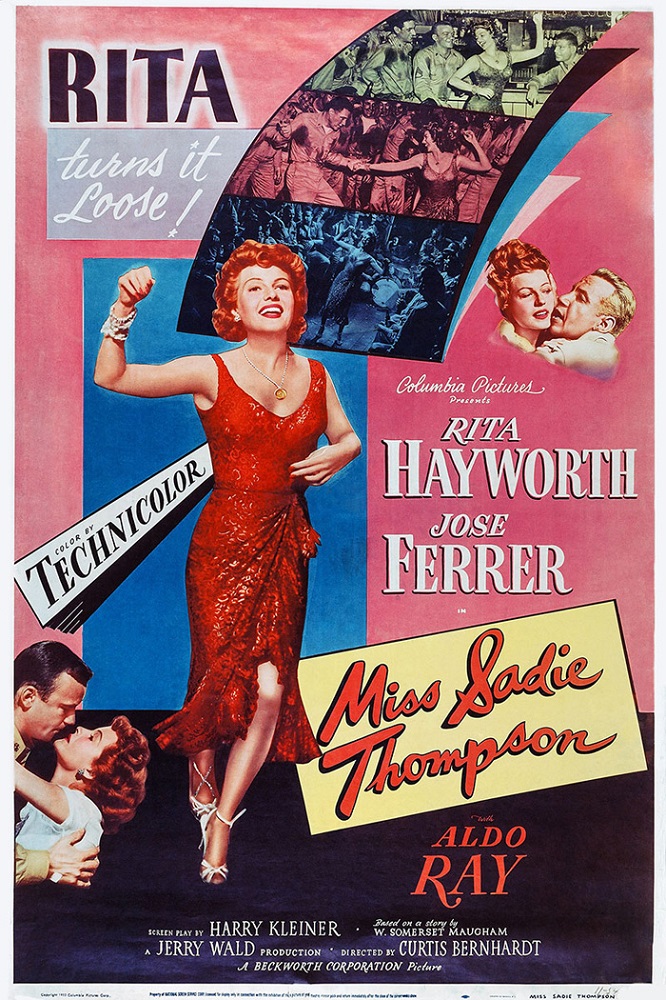