“My main problem is that I found the girls a bore and likewise the pic.“

Kentucky-born writer-director Allison Anders (“Gas Food Lodging”/”Four Rooms”/”Things Behind The Sun”), who lives in LA around Echo Park, tries for cinema verite in this episodic drama about a Hispanic girl gang in the mostly Latino section of Echo Park, in LA, that comes up short due to the strident performances by the local nonprofessionals who are mixed in with a few inexperienced professional actors. I don’t know if it’s authentic (though it seems to be), but the filmmaking is amateurish and lacking dramatic value. My main problem is that I found the girls a bore and likewise the pic, but don’t question the filmmaker’s concern for her sympathetic subjects and that the problems presented are real and of concern to the public’s welfare. I just wish it was a litter better, because it’s heart was in the right place. The film uniquely presents a feminist view of gang life, as numerous times it points out that the girls can’t depend on their men, who either aredead or disabled or in prison, and therefore must bond together in solidarity as family.

The film has three chapters and covers the up and down street life of five Echo Park girl gang members, who refer to themselves as locas: Sad Girl (Angel Aviles), Mousie (Seidy Lopez), Whisper (Nelida Lopez), Giggles (Marlo Marron) and Magali Alvarado (Blue Eyes). Anders gives us a cursory look at why girls join a gang, how most have children when they’re teenagers and how they seem trapped with no way out of a life of violence and crime.

Sad Girl and Mousie have been friends since childhood but become estranged over a smooth talking street drug dealer, Ernesto (Jacob Vargas), who impregnates both of them. The girls reunite after they clash when lover boy is gunned down by a white girl junkie.Whisper (Nelida Lopez) walks with a limp after being shot in the same incident with Ernesto, and tries after his demise to carry on alone his drug trade. Giggles (Marlo Marron) is a bit older than the other girls and is bitter that she was sent to prison for four years for a crime her boyfriend did. Therefore vowing to never let herself feel she needs a guy to take care of her (searching the papers for a straight job), and urging the other girls to also not depend on their man. La Blue Eyes (Magali Alvarado), the sister of Sad Girl, is not a gang member but the daydreaming proper college student who falls in love with a prisoner she never met except through letters, who fills her with beautiful romantic thoughts. Problem is the guy, El Duran (Jessie Borrego), is a phony and known as a womanizing heartbreaker by the other girls in the gang. The girls take her to a dance to see the ex-con for herself, but Ernesto’s homeboys rub him out because he was messing with their valuable customized painted mini-van they wanted to enter in the auto show contest.

It shows life in the inner city is rough, stupid and crazy, and that the not too bright but sympathetic young ladies struggle to raise their kids and resort to gang tactics only to protect their turf and self-interest. I’ve seen many films that used the same familiar theme, but offered a more powerful and insightful story about life in the ghetto. For various reasons I just couldn’t connect with this pic or its method of using a voiceover, as I found it had nothing to say I hadn’t heard many times before and said it in such a flat and oft-putting way that turned me off. 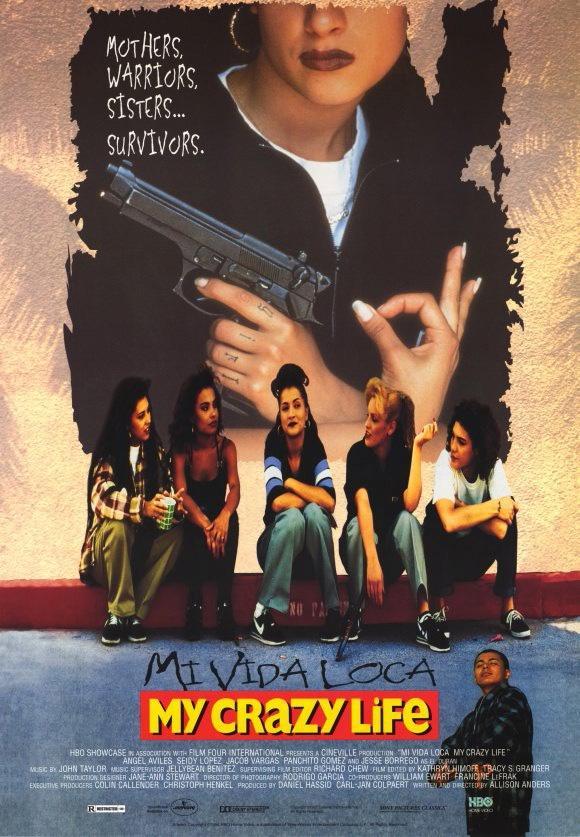