MY ARCHITECT: A SON’S JOURNEY

Filmmaker Nathaniel Kahn uses the film to explore the mysterious nomad life of his genius idealistic father–the renown architect Louis Kahn–a father he barely knew except for brief once a week visits during his childhood. Kahn, one of the most influential international architects of the second half of the twentieth century, died in 1974 at the age of 73, of a heart attack, as a bankrupt loner in the rest room of New York City’s Penn Station when Nathaniel was only 11. Since his address was crossed out on his passport, his body was taken to the morgue and was unclaimed for three days. He had just returned from India, where he was commissioned to build an office building for internal management, as his design remained intact and was completed after his death by other firms. His long list of acclaimed buildings include some of the following: the Salk Institute in La Jolla, the Phillips Exeter Academy Library in New Hampshire, Kimbell Art Museum in Fort Worth, Richards Medical Research Building in Philadelphia, National Capital of Bangladesh Assembly Hall in Dacca, and the Yale Art Gallery in New Haven. It was suggested by colleagues that, aside from the well-received Richards building, he was prevented from building in his Philly hometown due to anti-Semititic feelings by the town’s upper-crust leaders and artistic differences with the pig-headed city manager Edmund Bacon.

Louis was facially scarred in childhood for life when some coals set his clothes on fire, which he was drawn to because the light struck his curiosity. This happened in his birthplace on the island of Osel off the coast of Estonia, when he was a toddler. His working-class family immigrated in 1905, when he was four years old, to Philadelphia, where he grew up in poverty but excelled in school and was able to win a scholarship to the University of Pennsylvania. He received a degree in architecture and later taught at both Penn and Yale, but the minuscule 5 feet 6 inches Louis didn’t see his architecture career sprout until he was in his fifties.

It’s a very moving and beautifully realized first-person account about the legendary architect’s work, spiritual growth and unusual personal life, as some 25 years later and after five years of filming Nathaniel hopes to connect some of the dots in his father’s shadowy past. Nathaniel was born out of wedlock and was never publicly acknowledged by his assimilated Jewish father. Nathaniel’s Protestant mother, Harriet Pattison, worked in the same Philadelphia office as a landscape designer, and was aware that Lou was married to Esther Israeli and had a grown daughter Sue Ann. Esther supported him in his desperate early times and financially helped him open his first architecture firm.

The unfaithful Louis finished a longtime affair with another architect in his office, Anne Tyng, who also gave birth to a daughter of his named Alexandra. Soon afterwards he began his affair with Harriet. It is interesting how Harriet bares no visible anger towards Louis for never leaving his wife and eventually abandoning her and leaving her alone to raise their son, as she loved him so much and passively accepted her lonely lot in life–never meeting another man.

The son’s journey takes him to visit the sites of his father’s major works and to a series of startling interviews with old friends of his father’s, bemused relatives, taxi drivers who only knew his father casually as a womanizer, fellow noted architects such as Philip Johnson, Frank Gehry and I. M. Pei who speak glowingly of him and finally to revealing interviews with his father’s mistresses and his two half-sisters. Louis’s children meet in the ultra-modern Fisher House he built outside of Philly and exchange revelations, and decide if they are really a family. Only his loyal wife Esther does not appear live due to her death in 1996, but there’s a videotape interview from an earlier date.

The son’s search tries to put all the pieces to this unique man’s life together as if it were a Chinese puzzle, and the son hopes he can understand his complicated father a little better. Louis was an elusive man who believed he can best express himself in his work, as he often mentioned that human relations can’t always be relied upon. But by the end of his quest Nathaniel had a much better understanding of what motivated his father and an even greater appreciation of his father as both a flawed man and as an uncompromising artist.

Nathaniel creates a very warm, lyrical, humorous, moving and insightful film, whose subject-matter is universal even though it goes into the particulars of his father’s life–where he shunned money as the ‘be all of life’ and failed to meet the demands of business by always posturing as an artist living only for his art. I was totally taken by this story, finding it one of the more fascinating bios ever filmed. 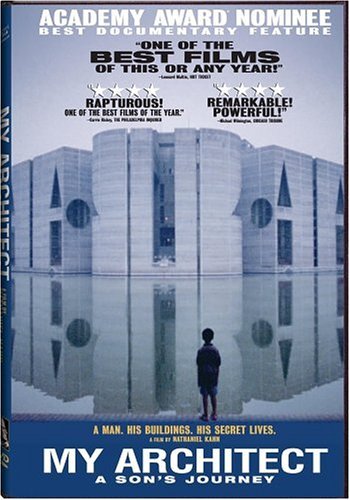