“It offers an honest up close personal look at the popular blues singer.”

An excellent documentary put together by Howard Alk, that uses family album photos, an interview format and rare concert footage to show the energetic Janis Joplin (1943-1970) in action. It offers an honest up close personal look at the popular blues singer; there’s nothing phony about Janis or this film. The filmmakers let the performances tell the story and do nothing to interfere with the flow. Janis mentions she didn’t start out to be a singer, it just began when she was hanging around with her folk singing friends and felt good singing the blues. In her Port Arthur, Texas, birthplace the quiet girl who was never asked to the High School prom by the straight student body, thought at the time she might be an artist. Janis found singing was an easier way for her to express herself openly in public and bask in the moment. When asked what do the young want: Janis replies “they want sincerity and to have a good time.” She gives props to Leadbelly, Aretha Franklin and Otis Redding as influences.

The film highlights her performances at the Monterey Pop Festival, with Big Brother and the Holding Company, at a Cheap Thrills recording session, on the Dick Cavett Show, at a Frankfurt Germany concert, and her appearance at Woodstock. There are 14 songs including “Piece of My Heart,” “Me and Bobby McGee,” “Tell Mama,” “Try,” “Cry Baby,” “Mercedes Benz,” “Move Over,” “Maybe,” “Kozmic Blues,” “The Good Days,” “Summertime,” and “Ball and Chain.” The music is great. Her death in October, 1970, is never mentioned, though it’s hinted at by showing an empty theater. Neither is her problem with substance abuse mentioned, the supposed cause of her death by overdose. 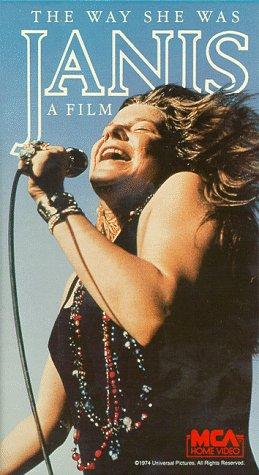