“With no saving graces, its story is so unpleasant it makes for a disgusting watch.“

Dull, low-budget gangster B-film that’s weakly directed by Edward L. Cahn(“The She Creature”/”Voodoo Woman”/”Invasion of the Saucermen”) and terribly written by Herbert Abbott Spiro.It’s unconvincing, poorly acted and shoddy in its execution.With no saving graces, its story is so unpleasant it makes for a disgusting watch.

Set in the Bronx, during Prohibition in the 1920s, where twenty-one-year-old Larry Shaw (Ron Foster) marries the innocent nineteen-year-old Margaret (Luana Patten) and poses as a successful insurance salesman. In reality, he’s an ambitious contract killer working for Bronx crime boss Chesty Miller (Grant Richards). Larry gets promoted by the boss to run his “discipline and execution,” or D&E, squads, and with his childhood pal Tony Maldano (Johnny Seven) as his right hand man, he protects the boss’ illegal warehouse distillery from rival gangs. The boss presents Larry with a machine gun and a case to carry the weapon around to jobs. The case is referred to as a music box, and when Larry makes headlines knocking off rivals the newspapers dub him the “The Music Box Kid.”

When Margaret discovers hubby is a monster killer, he won’t let her leave the marriage and threatens to kill her father and her friendly concerned pastor Father Gorman (Dayton Lummis) if she divorces him. Larry breaks from working with Chesty to operating his own gang, and now executes jobs for all the crime families in the city. He gets more greedy and kidnaps crime boss Biggie Gaines’ (Bernard Fein) right hand man Pat Lamont (Carl Milletaire), and orders Biggie to pay a $100,000 ransom for his release. To collect Larry goes to Biggie’s headquarters alone to get the money. Biggie forks over the money because he can’t afford to lose the brains behind his gang. Why he wouldn’t hold Larry to make an even swap, is beyond me. But the film was so unsatisfying that by that time I didn’t care to quibble why it made so little sense since everything about it was whack. The pic went through the motions showing how Larry’s action causes a heated gang war and the attention of law enforcement in the way of a Special Counsel appointed to bust the gangs. At last the tedious crime drama reveals how Larry got his come-uppance in the end and how Margaret got up enough nerve to rat out her monster hubby.

Larry was supposed to be the counterpart of real Bronx gangster Dutch Schultz. 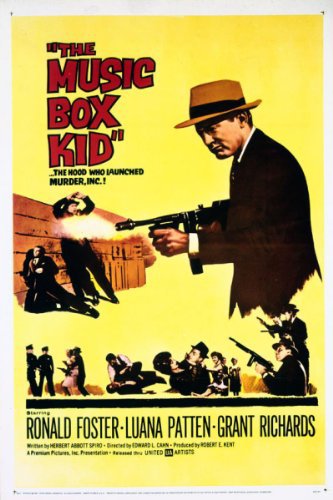