“Creates a scenario that it’s inevitable the heavy rains will fall over the bloody land because the gods are angry at all the senseless strife and chaos caused by the ethnic feuding on both sides.”

It’s the directorial debut of Milcho Manchevski (“Shadows”/”Opasna baba”/”Dust”) and the first feature made in Macedonia (located between the countries of Serbia, Bulgaria, Greece, and Albania), formerly a region of Yugoslavia. Macedonia has a large Albanian Moslem minority that feuds with the dominant Orthodox Christian Slav population, as the U.N. peacekeeping forces stationed there only seems to collect the bodies after the daily skirmishes of the well-armed foes and can’t stop all the gun-running. The director was born in Macedonia but has spent a large chunk of his professional career working in America on rock videos.

The glossy three-part story intertwines and leads forward and then back to the beginning story. It shows the beauty of the Macedonian landscape and tells us about the ethnic violence plaguing the newly formed country and how it even reaches to international borders, as the longtime enemies war again as a result of the Balkan ethnic cleansing crisis. Manchevski states in a pessimistic solemn way that the current bloody situation has its characters perpetually stuck with an irrational hatred for each other dating from ancient times. The dense riddle it presents says that the region can’t change for the better because it’s mired in ethnic hatred and as a result “Time never dies, the circle is not round.” The director clearly blames no one else but both sides for the current conflict.

Even though there are some authentic powerful moments of truth, there’s still an overall heavy-handed and forced feel that keeps the revealed tragedy from being anything but grim, hopeless, unbearable and not particularly profound. There’s an unnecessary cheapening of powerful scenes by the inexperienced director, as he instead turns in too many contrived slick sequences. The director-writer creates a scenario that it’s inevitable the heavy rains will fall over the bloody land because the gods are angry at all the senseless strife and chaos caused by the ethnic feuding on both sides.

Part I, entitled, Words, tells of a young monk, Kiril (Gregoire Colin), who has taken a vow of silence that he breaks when he shelters in the ancient mountaintop monastery a young Albanian Muslim girl, Zamira (Labina Mitevska), from a vengeful Christian mob chasing her down because she murdered a shepherd belonging to their village.

Part II, Faces, takes us to trendy London, where Pulitzer Prize-winning photographer Aleksandar (Rade Serbedzija) has been living in exile from his native Macedonia. He’s romancing Anne (Cartlidge), an English picture-editor in a photo agency, who is locked into a loveless marriage and is pregnant. When Anne refuses to accompany Aleksandar back to his birthplace village, he returns there alone after a 16 year absence unaware of the tragedy that caught up with Anne in the eruption of ethnic violence in a London restaurant after he left her—that shows there’s no safe haven in the world until there’s an international peace.

Part III, Pictures, has Aleksandar, tired of being a war photographer after his recent stint in Serbia, return to his violent homeland country divided by religious conflict, and his world-weary eyes detect that his childhood village hasn’t changed only that his adult eyes see things differently. Hungering for peace proves to be futile, as his return brings us back to complete the violent episode that was left out of Words.

It was nominated for the 1995 Oscar for Best Foreign Language film. 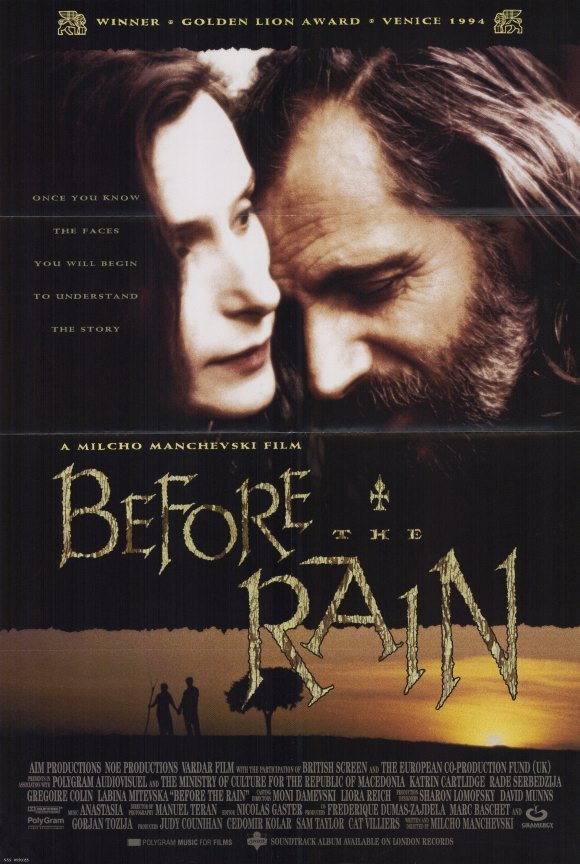