“The conventional crime film seems lively when it isn’t trying too hard to be so cute.”

“Murder By Numbers” is a routine crime thriller. It’s set in the wealthy seacoast suburban town of San Benito, California.

The unoriginal film is an easy watch and does not collapse until its conventional ending. Sandra Bullock stars as a sensitive and temperamental homicide detective with a personal history. It’s a role that she handles quite well — she also produced the film. Barbet Schroeder (“Single White Female”/”Reversal of Fortune”) directs this Bullock star vehicle with rote-like competence as this shop-worn story doesn’t have anything new to offer, but it’s not offensive and does get at some psychological issues. But there were a few questionable scenes, especially the one that adds nothing to the story where a baboon attacks Bullock — that scene is hard to justify surviving the cutting room floor.

Two wealthy, extremely bright, bored, and twisted high school classmate seniors, Richard Haywood (Gosling) and Justin Pendleton (Pitt), plan a random murder as a Dostoevsky type of philosophy exercise, to see if they can outsmart the cops and get a buzz off doing the crime without feeling guilty. They both have families that have spoiled them rotten while failing to give them warmth and moral support. Richard is arrogant, aggressive, obnoxious, cool as a turd, and though disinterested in school still receives high grades. His dad is the wealthiest person in town. Justin is his opposite in personality. He’s a bookworm (reads Rimbaud’s poetry), loner, brainy and nerdy, introverted, and socially awkward.

These two privileged teens are this generations answer to Leopold and Loeb. They plan the perfect murder and execute it to perfection. Homicide detectives Cassie Mayweather (Bullock) and Sam Kennedy (Chaplin) are new partners assigned the case, as lead detective Cassie has an attitude problem that makes her difficult to work with and the reason why she keeps getting new partners.

Cassie identifies with the brutalized woman victim, and her captain (Call) warns her she is not detached enough and should identify with the killer instead of the victim.

The smug teens have set-up the sleazy school janitor (Chris Penn), a drug pusher in the high school, to take the rap for the murder. But when Cassie intuitively feels the case is not closed after Sam pins the murder on the janitor and goes ballistic that the two repugnant teens have gotten away with the crime, the captain removes her from the case. In the tradition of this genre, she works on her own to find new evidence that the teens are the killers.

This is a film more about Cassie’s psychological problems and the teenager’s troubled minds, than it is a ‘whodunit.’ The film swings back and forth between the detectives working the case and of them relating intimately with each other, and then back to the teens and how wasteful their life seems to be despite having everything but caring parents. There is also the cute heartthrob Lisa Mills (Bruckner) to deal with, who becomes a prize for them and causes a rift in their secret friendship. She’s a flirtatious high school classmate, whom Justin adores and Richard seduces. She’s around to entice the boys and see if love is the answer to their problems.

The film shows that the partner killers bond because of their desire for forbidden power, while to outsiders they pretend to hate each other and could never be taken for soulmates who hug each other in a ritualistic homo-erotic way. In their duel for control, it’s difficult to say which of the two was the dominant one. On the other hand, the film is also a dramatic story about the ambitious, nice guy cop Sam being seduced to have sex with his troubled partner and with her finding a way to cope with her private problems by solving this case and thereby finding her inner source of strength to face life again without shame or anger. Unfortunately, Bullock’s romance with Sam lacked heat to make the romantic part of the story worthwhile. The teens steal this film, as their relationship is what makes this story hum with some excitement.

Schroeder puts a lot of the usual crime story ploys on the plate. But because Gosling and Pitt make their Columbine-like characters into complicated beings and not into stock characters, the conventional crime film seems lively when it isn’t trying too hard to be so cute. 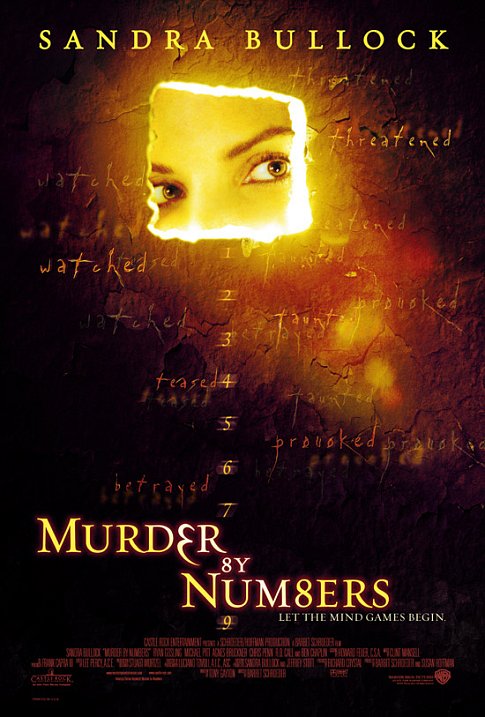